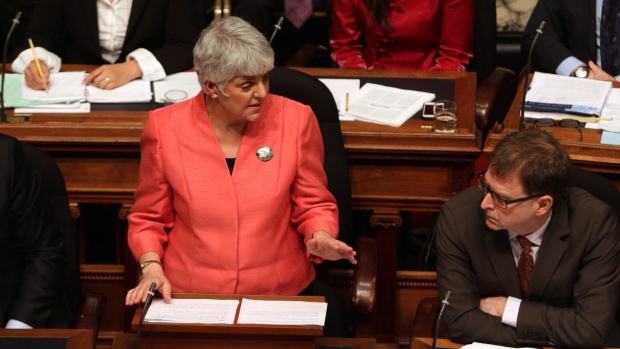 VICTORIA -- The B.C. government ended the last fiscal year with a surplus of $2.7 billion, largely in line with unaudited financial results released two months ago by the province's former Liberal government.

The 2016-17 public accounts released Tuesday by Finance Minister Carole James also show a $3.4-billion increase in revenue over the budget forecast while spending was $1.3 billion higher.

James said while B.C.'s economic growth outperformed most other provinces, poverty remains a reality for many people struggling to afford basic needs in a province where the cost of housing is high.

A 15 per cent tax on foreign home-buyers brought in last August in Metro Vancouver collected $102 million in revenue to the end of 2016, James said, adding she couldn't say whether the NDP would expand it to other hot real estate markets, including Vancouver Island.

She said the New Democrats are planning programs to benefit seniors, as well as low- to middle-income families that can't pay for quality child care and businesses that can't find employees because of the cost of living in some communities.

"It's really tough for people out there to see the benefit of a surplus this size when they're struggling day to day to manage, when you take a look at the poverty rates in our province," James said.

"A budget and a surplus belong to the people of British Columbia. The people of our province should see the benefits of any strong economy that we have."

James said the government will make key spending decisions in education, and some of them will be reflected in next month's financial update before a full budget is released in February.

Under the Budget Transparency and Accountability Act, the surplus will be applied to the provincial operating debt.

The province's GDP grew by an estimated 3.7 per cent in 2016, and James said private-sector forecasts expect B.C. to be among the top provincial economic performers in 2017 and 2018.

The Liberals released an unaudited financial update in June that pegged the surplus at $2.8 billion shortly before they were defeated in the legislature on a confidence vote, leading to the NDP forming a minority government.

"The unanswered question is whether the NDP have a plan on how to keep B.C.'s economy growing to ensure investments can continue to be made," she said in a news release. "This should not be a one-time spending spree that government can never afford again. We need to see a plan to sustain revenues."

James said unprecedented wildfires in the province's Interior will eat away at the surplus, with much of the fire season still to come.

She said financial challenges facing the provincial auto insurer, the Insurance Corporation of British Columbia, are "very alarming" and in the next week or so she expects the minister responsible to provide "specific approaches" to deal with those issues.

Bellringer said the corporation doesn't meet the criteria to be self-supporting and that puts taxpayers on the hook for its $3.4 billion debt. However, she said the difference doesn't affect the government's bottom line.

One other concern surrounding federal government revenue transfers means the government's reported surplus of $2.7 billion should have been higher by $900 million, she added.

James said the government believes the most transparent process is to ensure project revenues and costs are amortized "so people see the expenses going out as the project comes online."

Alberta, Ontario, Quebec and Nova Scotia use the same process for deferred revenue, she said.