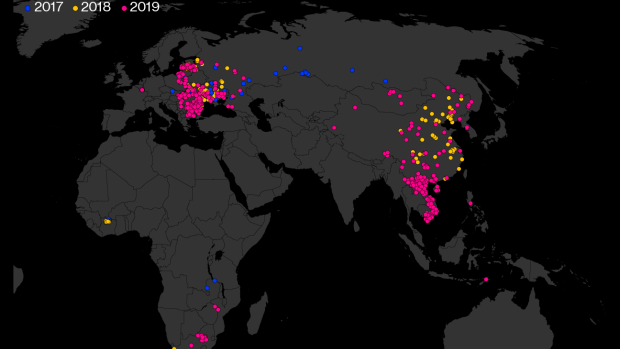 (Bloomberg) -- U.S. restaurants are diving head first into breakfast at a time when supplies of the meal’s centerpiece -- pork -- are at risk. They’re taking a risky bet that Americans’ love of sausage and bacon will bring a boost that outweighs the impact of meat inflation.

Wendy’s Co. has a $20 million plan for a national breakfast rollout next year, including a breakfast Baconator sandwich. McDonald’s Corp. also recently began ramping up breakfast ads, with the meal accounting for a quarter of its sales, around $10 billion, according to an approximation from BTIG LLC analyst Peter Saleh. Burger King is trying to lure more morning customers with better coffee. All this comes just as it looks like the pork world is heading for crisis.

African swine fever is raging in Asia and killing off millions of pigs in China, which produces and consumes about half of the world’s pork. By yearend, the country’s production will plunge 60%, according to researcher Global AgriTrends. That’s likely to create a protein gap that the world’s suppliers won’t be able to fill. Pork costs have already skyrocketed in the country, indicating shortages, and analysts are predicting the price gains could start spreading into the U.S.

Restaurateurs are willing to gamble on pork because consumers are increasing breakfast spending at a faster rate than at other meals, data from NPD Group show. Profit margin percentages are also higher.

“There’s certainly a risk that China could take more pork,” said David Maloni, executive vice president of analytics at researcher ArrowStream. “Although commodity prices are important, they typically can be outweighed by the sales expectations growth.”

Adding bacon as an ingredient to a menu item is a recipe for a sales boost, according to Bobbie Moorman, who manages protein procurement at Quality Supply Chain Cooperative Inc., part of Wendy’s. Wendy’s first gave the world the Baconator burger in 2007 -- with six slices of bacon. The breakfast push comes at a time when fast-food chains are locked in a battle to win customers amid aggressive discounting and more competition.

The Deadly Virus That’s Killing Off Millions of Pigs: QuickTake

Smithfield Foods Inc., the world’s biggest pork producer, will prioritize supplying its long-held U.S. customer base before directing meat for export to China, Arnold Silver, director of raw materials procurement, said this week at an industry conference in Chicago. Still, pork bellies, the raw material for bacon, and hams are most at risk for seeing shortages, Silver said. Smithfield is owned by Hong Kong-listed WH Group Ltd.

Nevertheless, there are signs the U.S. is gearing up to supply the massive shortfalls in Asia. Since February, hog processors have been retooling to process more hog carcasses for export to China, and some plants are strictly servicing that market, said Isaac Olvera, commodities analyst at ArrowStream. JBS USA also said earlier this month it would cut a growth promoter from its hog feed that’s banned by China.

Restaurants have ways of managing inflation. If pork prices move up, they can promote something with less pork in it, or just raise the price of your sandwiches, said BTIG’s Saleh.

“Everyone puts bacon on everything now, but it’s really just a condiment,” Maloni of Arrowstream said. “It’s really kind of modest compared to the rest of the products. This would probably be much more concerning if this were beef or chicken.”