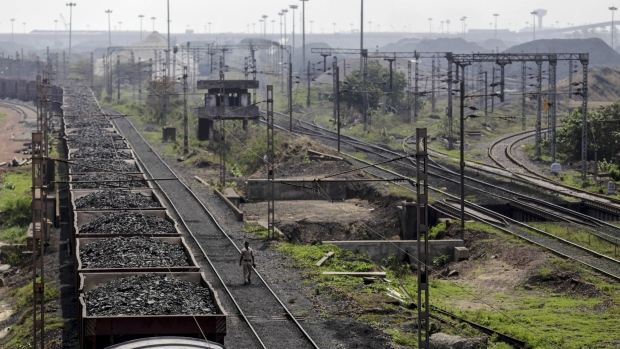 A freight train laden with coal stands on the tracks in Paradeep, Odisha, India, on Monday, May 6, 2019. Authorities launched a massive restoration-and-relief effort after Cyclone Fani left a trail of damage in eastern India and Bangladesh. Photographer: Dhiraj Singh/Bloomberg , Bloomberg

(Bloomberg) -- India’s top metal producers are searching for ways to trim their consumption of coal after sky-rocketing prices of the fuel ate into their profits.

Benchmark thermal coal prices have more than doubled in the past year and could surpass October’s record high as deliveries from Indonesia are delayed and a global energy squeeze continues. Coking coal, a key raw material in the steelmaking process, has risen by nearly a third in Dalian in the same period.

“We are of course badly hit by the increased cost of coal but at the same time we also gained by the increased price of the metal,” Arun Misra, chief executive officer at Hindustan Zinc, said in an interview.

The country’s biggest zinc producer is aiming to cut costs by as much $20 a ton from an average production cost of $1,116 in the nine months through December. “This depends on how much you can squeeze the lemon. Everyday we sit down to find out more and more areas of improvement.”

Hindustan Zinc is looking to minimize the cost of coal through measures including by improving operating efficiencies and reducing consumption of the fuel by modifying its turbines, Misra said.

Meanwhile, JSW is bracing for a minimum addition of $25 a ton to coal costs as prices surge again this month, according to Seshagiri Rao, joint managing director at the steel producer. At the same time, the higher costs of coal and iron ore will mean steel prices will remain elevated at least in the current quarter, he said.

The Mumbai-based mill expects to commission some power plants at its Maharashtra complex this quarter to reduce power expenses and is exploring blending changes in coal to reduce consumption in the coke oven, he said.