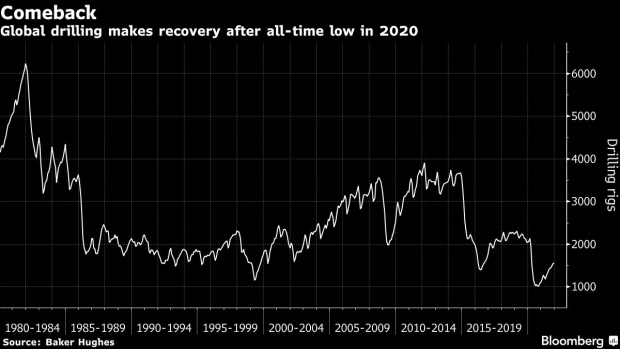 “We believe the broader macro recovery should translate into rising energy demand for 2022 and relatively tight supplies for oil and natural gas,” Chief Executive Officer Lorenzo Simonelli said Thursday in the Houston-based company’s fourth-quarter earnings report. The world’s No. 2 oilfield contractor beat analysts’ expectations with fourth-quarter orders of $6.7 billion, up from $5.2 billion from a year earlier, according to the statement.

The hired hands of the oil patch are staging a comeback after the coronavirus pandemic triggered an historic blow to crude demand. Baker Hughes, along with Schlumberger and Halliburton Co., have endured years of painful cost-cutting and made efforts to pivot away from the boom-and-bust shale patch. But with the global economy rebounding, the world’s three biggest oilfield servicers are expected to deliver strong results for the final three months of 2021.

“The economic recovery coupled with several years of oilfield underspending has given rise to a new energy cycle,” Charles Minervino, an analyst at Susquehanna International Group, wrote in a note to investors last week. “The diversified services companies should exit 2021 on a high note.”

Baker Hughes on Thursday was the first of the big three oil-services companies to release financial results for the final three months of the year, posting sales of $5.5 billion that also beat analysts’ expectations. Fourth-quarter earnings, excluding certain items, were 25 cents a share, missing analysts’ estimates by 2 cents.

The latest batch of order for Baker Hughes, which was led by its turbomachinery business, was more than $1 billion higher than analysts expected, according to data compiled by Bloomberg.

Global oil drilling is climbing from a crater after rig counts plummeted to record lows in late 2020. Explorers around the globe are expected to almost triple the pace of spending hikes this year compared to 2021, according to Evercore ISI. International regions are should be responsible for a record 81% of explorers’ global spending this year, Evercore analyst James West said by phone.

That’s a promising sign for the big three service companies, which now generate most of their sales outside the U.S. and Canada.

“Companies are all very well positioned heading into 2022,” J. David Anderson, an analyst at Barclays Plc, wrote in an email before the results were released. “The question is where the growth comes first and fastest.”