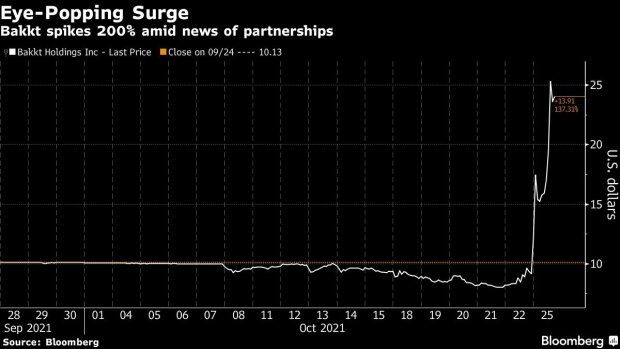 (Bloomberg) -- Bakkt Holdings Inc., the cryptocurrencies firm that spun off from Intercontinental Exchange earlier this year, tripled after it announced agreements with Mastercard Inc. and fintech firm Fiserv Inc.

Gains in the stock accelerated after Bakkt said it has partnered with Fiserv, which offers financial services that allow businesses to move funds into and out of mobile wallets, among other things. The new partnership will now also allow Fiserv -- via a program called Carat -- to offer B2B and B2C payouts and different loyalty programs and transactions using crypto assets, according to a press release.

Mastercard Inc. said earlier in the day that it had inked a deal with Bakkt to make it easier for banks to offer cryptocurrency rewards on their credit and debit cards. For many in the crypto community, the move suggests that a greater number of people could be exposed -- and become more interested in -- digital assets.

Bakkt was originally formed in 2018 as a venture that included Starbucks Corp. and Microsoft Corp. as investors to more tightly integrate digital currencies into global commerce. Despite Bitcoin’s astronomical surge, it’s still not widely used to buy and sell actual goods in most countries.