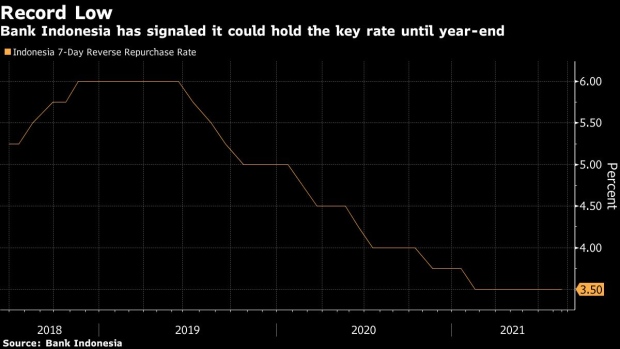 The entrance to the Bank Indonesia headquarters in Jakarta, Indonesia, on Tuesday, Sept. 21, 2021. Indonesia's central bank is expected to keep its policy rate unchanged at a record low to drive a recovery in Southeast Asia's largest economy, as the virus wave subsides and activity gradually resumes. Photographer: Dimas Ardian/Bloomberg , Bloomberg

(Bloomberg) -- Indonesia’s central bank left its benchmark interest rate unchanged at a record low as the economy begins to show signs of recovery from the country’s worst coronavirus wave yet.

Bank Indonesia held the seven-day reverse repurchase rate at 3.5% on Tuesday, as expected by all 31 analysts in a Bloomberg survey. The key rate has been at that level since February, and central bank Governor Perry Warjiyo has signaled the bank could remain on hold at least until year-end.

Southeast Asia’s biggest economy has been buoyed by a sharp improvement in its Covid-19 outbreak thanks to movement curbs, aggressive testing and an advancing vaccination campaign. Last week the country added its fewest new cases since November, while daily fatalities are at a three-month low. Lockdown measures have been relaxed further across the nation, with shopping malls, tourist sites and places of worship reopening with limited capacity.

That bodes well for an economy reliant on private consumption, especially with gross domestic product growth  expected to dip in the third quarter as the outbreak peaked in July and August. Bank Indonesia expects GDP to expand 3.5%-4.3% this year, slightly below the government’s 3.7%-4.5% estimate.

As the world’s major central banks weigh unwinding their pandemic-era monetary support, Bank Indonesia has affirmed it will keep policy settings loose for as long as possible while the recovery firms up, even extending a program to buy government bonds through next year. Consumer prices rose 1.6% in August, well below the central bank’s 2%-4% target range for inflation.

The rupiah, a bellwether of risk for emerging Asia, is also seeing a bout of strength as the market appears to have priced in the U.S. Federal Reserve’s expected tapering of asset purchases. The rupiah the best-performing currency among developing markets this quarter with a gain of 1.8% against the dollar, according to data compiled by Bloomberg.