The Bank of Canada will continue pulling back its support for the economy at a policy decision this week, paving the way for the start of interest rate increases next year amid inflation worries.

Governor Tiff Macklem is expected to reduce weekly government bond purchases by one half on Wednesday to $1 billion (US$809 million). That will mark the fourth time over the past 12 months the central bank has rolled back a program that has poured hundreds of billions into the financial system since the start of the COVID-19 pandemic.

The sooner the central bank stops adding support to the economy, the faster they are expected to pivot to a tightening cycle. Investors are anticipating the Bank of Canada will start raising interest rates within the next six months, with markets pricing in four rate hikes next year.

“Inflation is more powerful than policymakers believed a few months ago,” Doug Porter, chief economist at Bank of Montreal, said by phone. “The world has changed and I think policy has changed.” 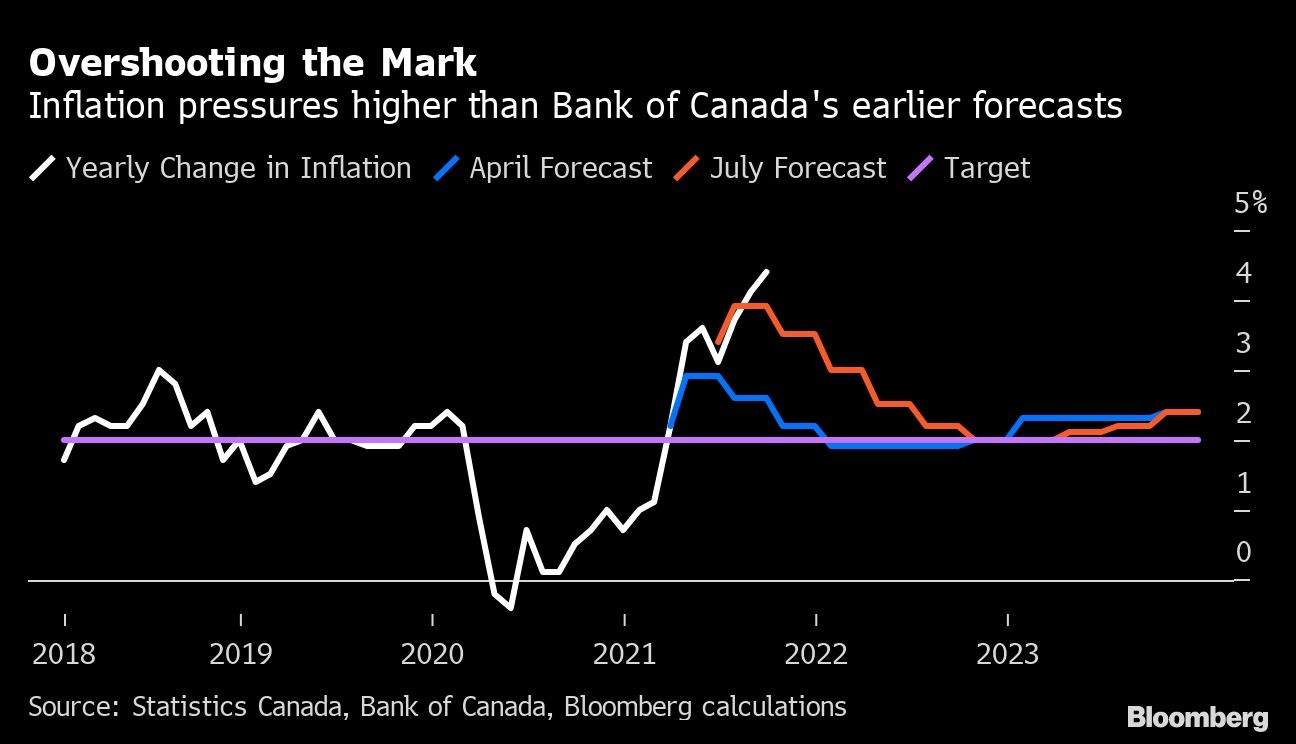 The Bank of Canada has been using two major tools to keep borrowing costs low: maintaining its policy interest rate near zero and buying up hundreds of billions of government bonds from investors to keep longer-term borrowing costs in check. Officials have said they will only start raising interest rates once their purchase program plateaus.

The central bank has already increased its bond holdings by about $350 billion since the start of the pandemic. It started buying $5 billion a week initially in the secondary market but has since tapered those purchases three times to bring it to the current pace of $2 billion.

One big question analysts have going into Wednesday’s decision is whether Macklem will push back against the market’s pricing of rates, which is far more aggressive than guidance given by policymakers until now. The governor will speak to reporters at 11 a.m. in Ottawa.

The Bank of Canada has tried to maintain plenty of caution in its forecasts, sticking to projections the run up of inflation will be temporary in an economy that will continue to carry slack for some time.

Macklem has also been promising not to raise the benchmark interest rate until the recovery is complete. The bank’s last forecasts in July didn’t see that happening until the second half of next year.

What Bloomberg Economics Says...
“The Bank of Canada will turn more vigilant on inflation risks at Wednesday’s meeting. Though communications should prove hawkish relative to September, the BoC may lean against growing market expectations for a hike as early as April 2022.”
-- Andrew Husby, economist

But the buildup of inflationary pressures will test the Bank of Canada’s patience.

Consumer price gains have hit their highest since 2003, and inflation is well above the Bank of Canada’s 1 per cent to 3 per cent control range. Officials will need to revise their inflation estimates higher on Wednesday when they release a fresh batch of forecasts.

At a media availability earlier this month, Macklem acknowledged the supply chain disruptions driving price pressures are more persistent than expected and that inflation will take longer to “come back down,” though he is sticking to the transitory narrative.

Complicating Macklem’s ability to signal more aggressive rate hikes -- even if he wanted -- is a growth picture that is weaker than the bank has been predicting. That’s largely thanks to a surprise contraction in the second quarter after a third wave of COVID-19 hit the country.

“We don’t see the bank validating the recent move higher in interest rate expectations, instead maintaining its guidance that it will keep the overnight rate steady until economic slack is absorbed in the second half of 2022,” Josh Nye, an economist at Royal Bank of Canada, said by email.

To be sure, there are options should officials decide to reinforce a faster rate-hike scenario. They could renege on their forward guidance to not hike before slack is fully eliminated, citing the growing inflation concerns. But that comes with a risk of damaging the central bank’s credibility.

Another option for policymakers could be to mark down their estimates of the amount slack in the economy. The move could be cast as an acknowledgment that the COVID-19 pandemic has led to deeper changes to the economy that will keep Canada short of workers and goods for much longer than initially anticipated.

“It does seem supply side issues are going to last longer, so it will be interesting to see if they drop potential output in near term,” said Sri Thanabalasingam, an economist at Toronto Dominion Bank.