At the lower bound of rates, deflation is a bigger problem than inflation: Ed Devlin

Governor Tiff Macklem was going to risk losing some credibility at this week’s Bank of Canada decision, whatever he did.

His own analysts presented him with evidence the economy is on the cusp of overheating and made a clear-cut economic case to hike immediately. But Macklem had told Canadians and investors they’d get a heads up before increasing rates. A move Wednesday could have been seen as a betrayal of that promise.

Instead, he chose to leave the bank’s policy rate unchanged at 0.25 per cent for at least five more weeks, despite forecasts that inflation in coming months will accelerate from December’s three-decade high of 4.8 per cent.

“We increasingly see the BoC as behind the curve on inflation,” Warren Lovely, chief rate strategist at National Bank of Canada, said in a report. “Will waiting any longer really help the situation? Not likely.”

Though Macklem took the reins at the Bank of Canada in June 2020, Wednesday’s decision was the first at which hiking was a real option. A new set of quarterly forecasts that accompanied the policy statement showed an economy that is right up against full capacity.

Macklem’s repeated statements that hikes are coming illustrate the extent to which the Bank of Canada is uncomfortable with the current level of interest rates. He characterized the decision to drop forward guidance as a “significant” shift in policy  -- a bid to sound hawkish even as he bucked market expectations for a rate hike.

“Everybody should expect interest rates to be on a rising path,” Macklem told reporters after the decision.

Still, he acknowledged the central bank wanted first to deliver an advance signal that borrowing costs are going to rise as part of a “deliberate series of steps.”

“The bank elected to preserve the ability to use forward guidance as a credible policy tool by choosing to drop it first, and to thus signal that hikes will follow,” Ian Pollick, who heads fixed income, currency and commodity research at the Canadian Imperial Bank of Commerce, said in a report to investors.

Market pricing suggests that the communications strategy may have even worked. Investors are still pricing in six rate hikes over next 12 months as before, now starting in March instead of January.

Yet, in the process, some economists warned the governor may be revealing he either saw no urgency on the inflation front or that he will be a cautious central banker as he hikes rates -- or both. 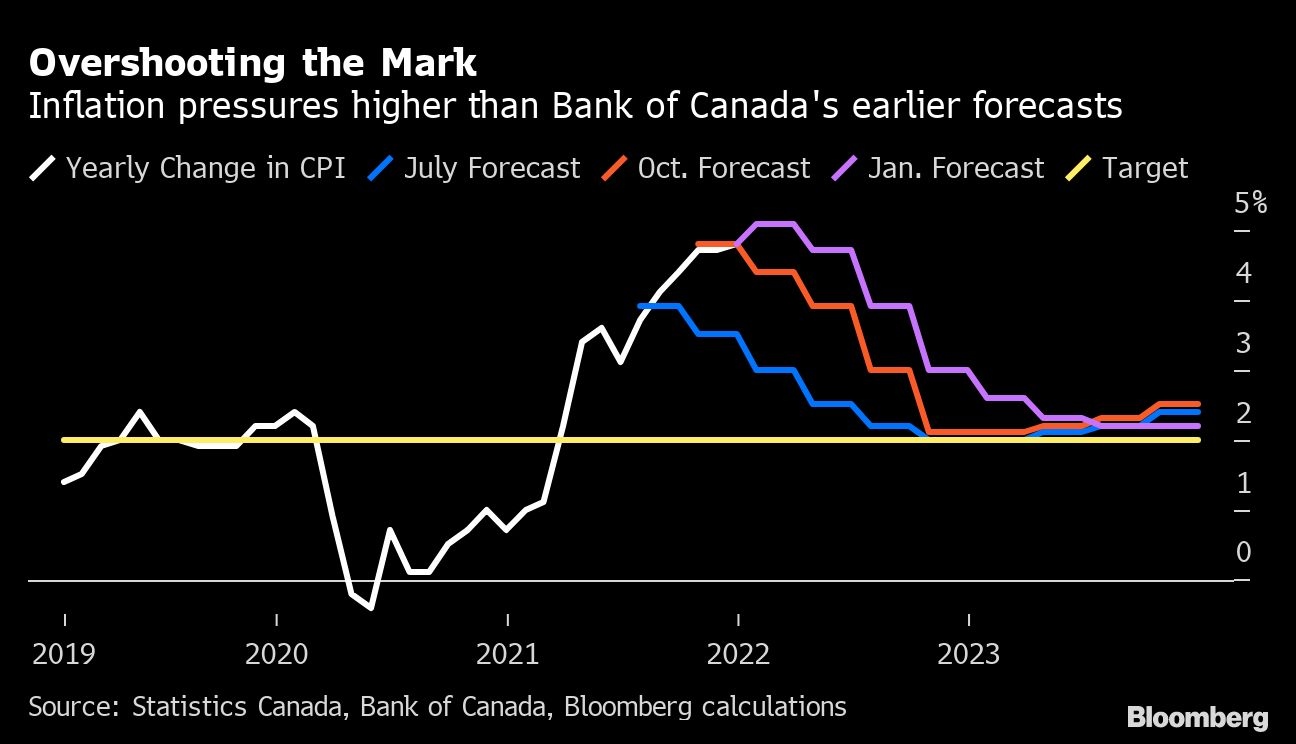 Despite his hawkish tone on Wednesday, critics point out that Macklem was actually prepared to see financial conditions ease by holding rates steady given the market was expecting a hike.

Canada’s currency weakened on the news. The difference in yields between two-year U.S. and Canadian government bonds -- an indication of expected monetary stances -- narrowed to its lowest since April last year.

“It is clear that they believed it would be better to have more stimulative financial conditions coming out of this meeting rather than less stimulative conditions,” Jean-Francois Perrault, chief economist at Bank of Nova Scotia, said by email. “That is hard to square with his repeated insistence that they were signaling a large shift in policy in their statement.”

The worry is that even a five-week hold will continue fueling a housing market that’s seen record price gains. It could also undermine already wobbly confidence the Bank of Canada is serious about tackling inflation.

A Bloomberg News poll published last month found a large majority of Canadians, or 63.5 per cent, say they lack confidence that inflation will return to more normal levels.

Macklem reiterated that the Bank of Canada is closely monitoring perceptions of consumer prices, but said it doesn’t see evidence yet that inflation expectations are de-anchoring in the longer term.

Expected price gains are a key determinant of actual inflation. Businesses increase prices and workers seek pay raises in part on what they anticipate costs will look like going forward. In other words, the higher inflation is expected to be, the higher it will be.

If the Bank of Canada’s decision to forgo a rate hike stokes inflation and wage expectations further, the end result could be a central bank forced to make even more dramatic hikes to bring price pressures under control.