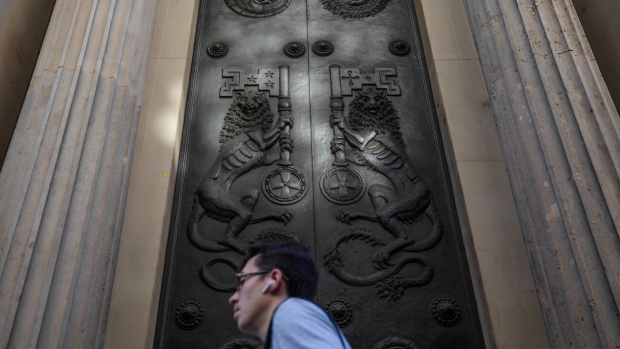 A pedestrian walks past the doors of the Bank of England (BOE) in the City of London, U.K., on Tuesday, Aug. 4, 2020. Bank of England officials could signal on Thursday that the case for more monetary stimulus is growing as a nascent rebound from the pandemic-induced recession risks fading. , Bloomberg

Bank of England Governor Andrew Bailey said he wanted more staff to return to the office to help pass on skills to people who just joined.

The central bank shifted many of its systems to allow staff to do their jobs from home during the pandemic. Now it’s starting to focus on the longer term impact of having people scattered.

“We do want more of the staff to come back more,” Bailey said in an interview with the “Jimmy’s Jobs of the Future” work podcast. “You do get benefits of having face to face conversations of the sort that you don’t get on screen.”

The remarks follow criticism from the media and members of Parliament over a BOE policy to allow staff to work from home as much as four days a week. Prime Minister Boris Johnson and his allies have encouraged companies to call back workers, noting that their absence is devastating city centers and especially London.

The Daily Mail last week cited former Cabinet minister Liam Fox saying that it “seems strange that in an inflationary crisis, so few key personnel are attending their place of work.”

Bailey said he’d try to find “a balance” between office and home work. Over time, he said, more people would go back to face-to-face meetings because more comes across informally than in video calls.

The governor said he wants to make sure that “the staff that join us get the same benefits that we all got in being able to interact with the people who have been here and learn from them.”