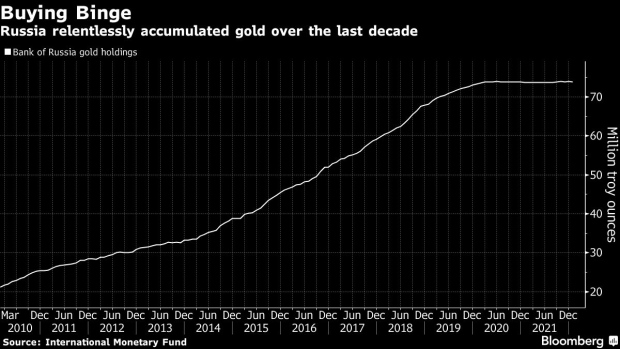 A worker handles 12 kilogram gold ingots following automated casting at the Prioksky non-ferrous metals plant in Kasimov, Russia, on Thursday, Dec. 9, 2021. Bullion is heading for its first annual drop in three years as central banks start to dial back on pandemic-era stimulus. , Bloomberg

(Bloomberg) -- The Bank of Russia said it will start purchasing gold again, just under two years after it ended a long-running buying spree that helped prop up bullion prices last decade.

The central bank will start buying gold again on the domestic precious metals market, it said in a statement. The move comes after the central bank and several of the country’s commercial banks were sanctioned in response to Russia’s invasion of Ukraine.

The Bank of Russia spent six years rapidly accumulating gold, doubling its holdings and becoming the biggest sovereign buyer. It stopped in March 2020 as prices spiked at the onset of the pandemic, and has largely kept its stockpile steady since. The Russian purchases provided a key pillar of support for the market at a time when demand from investors was muted.

Gold prices swung wildly last week, surging as investors turned to haven assets after Russia invaded Ukraine and then tumbling back again as western nations acted to impose sanctions. Prices closed on Friday at $1,889.34 an ounce, up about 5% since the start of the month.

Central bank buying has been a key source of demand for gold in the past year, alongside reviving appetite from Asian jewelry consumers. Central banks added 463 tons to reserves in 2021, an increase of more than 80% from a year earlier, according to the World Gold Council.

Russia had more than 2,000 tons of gold at the end of December, according to data from the International Monetary Fund, accounting for just over 20% of its reserves. It’s the fifth-biggest sovereign gold owner globally.