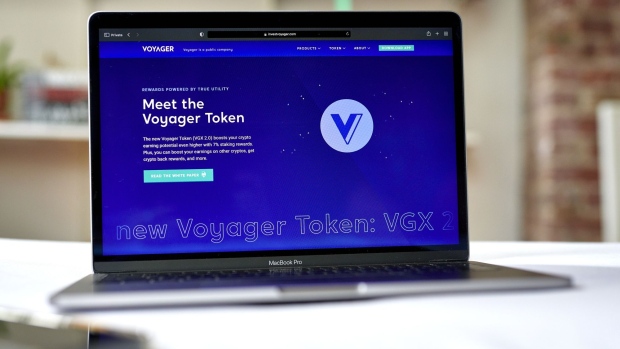 The Voyager Digital website on a laptop computer in the Brooklyn borough of New York, US, on Friday, July 8, 2022. Crypto broker Voyager Digital Ltd. filed for Chapter 11 bankruptcy protection just weeks after getting a lifeline from billionaire Sam Bankman-Fried’s Alameda Research, citing market volatility and the collapse of a hedge fund it had lent money to. Photographer: Gabby Jones/Bloomberg , Bloomberg

The auction will be held at 10 a.m. on Sept. 13 in the New York offices of Voyager’s investment bank Moelis & Co., according to a notice filed in bankruptcy court Tuesday. A court hearing to approve the results is scheduled for Sept. 29.

The need for an auction means Voyager received more than one acceptable bid for its assets and no bid was clearly the best. That could be good news for Voyager customers still locked out of their accounts: a higher final price tag for Voyager may result in better recoveries for customers.

Sam Bankman-Fried’s FTX and Alameda publicly disclosed a joint bid for Voyager in July, but Voyager called it a “low-ball” offer.