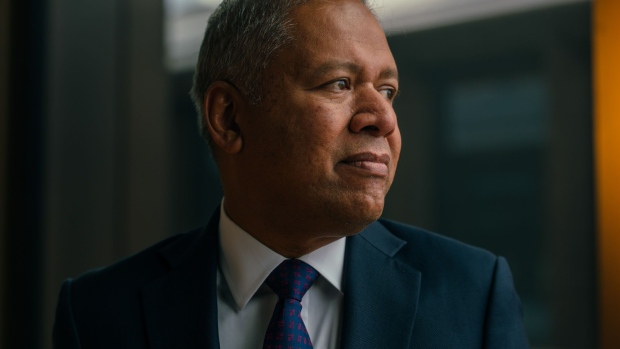 (Bloomberg) -- C.S. Venkatakrishnan, the chief executive officer of Barclays Plc, has a form of lymphoma and will undergo treatment for several months.

“I have been diagnosed with non-Hodgkin lymphoma,” Venkatakrishnan, 56, said in a regulatory filing Monday. “The doctors have advised that my prognosis is excellent, and my condition is curable with their prescribed regimen.”

During his treatment, which is expected to last 12 to 16 weeks, the lender will “run normally” and Venkatakrishnan “will continue to be actively engaged in managing it.” He will have to work from home for some periods and won’t be able to travel, the filing said.

Non-Hodgkin lymphoma is a cancer of the lymphatic system that affects more than 80,000 people annually in the US and UK. The five-year survival rate is about 64% for men, according to Cancer Research UK.

“The matter has been detected early, with scans and biopsies confirming it to be very localised,” Venkatakrishnan said. “I have always exercised regularly and am strong and fit as I commence this treatment.”

There is precedent for major bank CEOs to stay in their roles while undergoing cancer treatment. Lloyd Blankfein ran Goldman Sachs Group Inc. while undergoing chemotherapy for lymphoma in 2015, while JPMorgan Chase & Co. boss Jamie Dimon received treatment for throat cancer in 2014. Both men announced the treatments worked about six months later.

Venkatakrishnan took the helm of Barclays a little more than a year ago, having joined the bank from JPMorgan in late 2015. He took over from Jes Staley, his one-time mentor, who abruptly stepped down amid an investigation into his ties to the late financier and sex offender Jeffrey Epstein.

The Indian executive has held several senior risk roles in his career, including one where he helped to spot the dangers within the London Whale trading strategy about a decade ago. His time in charge of Barclays has come with several bouts of market turmoil due to Russia’s invasion of Ukraine, surging inflation and the near-freezing of the UK gilts market.

But the lender’s global investment bank has continued to perform well, even as it navigates the fallout from a clerical error last year that sparked derision on Wall Street, vindicating his backing of the unit. In the third quarter, the corporate and investment bank made up about half of the group’s earnings.

“We have a highly capable and seasoned executive committee, supported by a talented senior management team,” the CEO said in the filing, adding that he was “extremely grateful” for the support of the bank’s board.