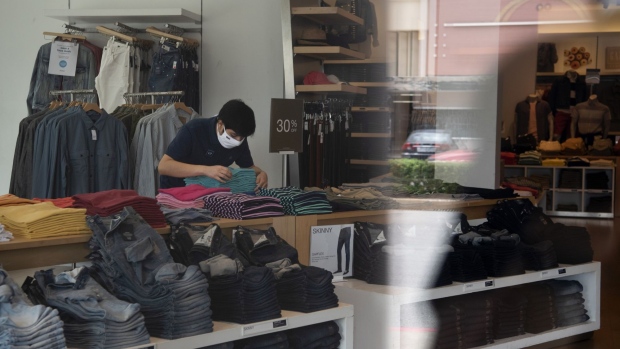 A worker wearing a protective mask folds clothes at a Gap Inc. store in Houston, Texas, U.S., on Saturday, June 27, 2020. On Friday, the top official in Harris County, which includes Houston, declared an emergency as the Covid-19 outbreak intensifies. Photographer: Callaghan O'Hare/Bloomberg , Bloomberg

The American Apparel & Footwear Association, which represents firms such as Gap Inc., Bloomingdale’s Inc. and Macy’s Inc., warned of empty shelves and higher prices during the holiday shopping season. To address that worry, President Joe Biden announced last week that the Port of Los Angeles will begin operating 24 hours a day and seven days a week.

“The administration’s move last week to secure longer hours at the Ports of LA and Long Beach is largely symbolic,” Steve Lamar, president of the American Apparel & Footwear Association, said in a statement. “It fails to address the continuing problems moving containers out of the ports, or what is going on at other ports around the country.”

The group called on the U.S. to take action against “the scourge” of excessive and unjust fees and repeated its call for tariff relief to help offset rising freight costs.