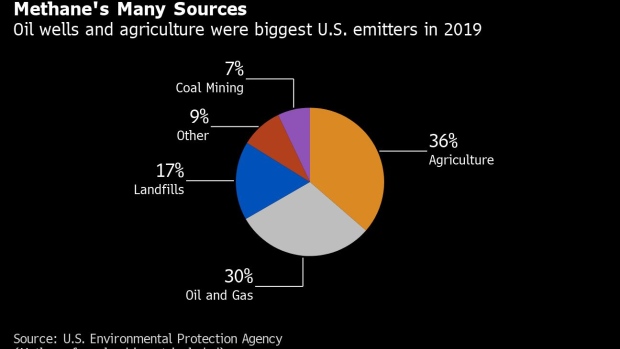 (Bloomberg) -- The free ride for methane, a climate-warming gas 84 times stronger than carbon dioxide, is finally nearing an end in Washington.

While one atmosphere-heating pollutant after another has fallen under regulators’ sway, powerful petrochemical interests and, until recently, scientific uncertainty about the scale of the problem, have thwarted methane restrictions. That will begin to change in coming weeks when the Biden administration proposes the most aggressive federal methane mandates yet for oil and gas wells.

Curbing methane -- blamed by scientists for more than a quarter of the global warming happening today -- has acquired new urgency as the consequences of climate change become more apparent in drought-fueled forest fires ravaging the Western U.S. and intense coastal storms drenching cities with record rainfalls.

The administration’s coming regulations, to be proposed by the Environmental Protection Agency, will address leaks from nearly a million oil and gas wells -- among the largest sources of the gas. The EPA proposals would order more robust inspections and repairs of equipment at new wells and would force companies to plug leaks on hundreds of thousands of wells that were drilled long ago but have so far escaped restrictions.

The proposals also are expected to block drillers from simply venting methane that accompanies oil directly into the air or burning it off, with flares so concentrated they can be seen from space. That is done in some regions because methane, despite being the chief ingredient of natural gas, is often treated as an unwanted byproduct when it emerges from oil wells and there aren’t pipelines to carry it to paying customers.

The move comes after President Joe Biden unveiled a plan to persuade other countries to slash emissions of the gas 30% by the end of the decade.

The delay in taking action has frustrated environmentalists because existing technology can capture the vast majority of methane from oil and gas sites -- making the industry’s emissions low-hanging fruit in the fight against global warming.

“The leakage is so bad, not just here but in Russia and many other places, and it’s so cheap and easy to fix,” said David Doniger, director of the climate and clean energy program at the Natural Resources Defense Council. “With the lifetime of methane being much shorter than CO2, the damage it does is in the next couple of decades -- and, conversely, the benefit of not emitting it -- is going to be felt in the next couple of decades.”

Yet some environmentalists worry the administration’s push is ignoring methane coming from agriculture, which is responsible for 36% of emissions from activities in the U.S., according to the EPA. More than two dozen green groups have petitioned the EPA to write new regulations reducing methane emissions from industrial dairy and hog operations.

“There’s this sense that ag is almost untouchable,” said Tarah Heinzen, legal director of Food and Water Watch. “We’re really concerned that EPA is going to continue its past practice of giving factory farms a pass from environmental regulation. It’s a very politically powerful industry, and administrations on both sides of the aisle have looked the other way from agricultural pollution for decades.”

For now, the government has focused mostly on federal funding, voluntary programs and research into ways to keep methane from escaping out of manure ponds and from livestock, including through special devices, dietary shifts and changes in waste management.

When it comes to new methane mandates, the administration’s regulatory focus is trained squarely on the oil and gas industry.

“EPA is focusing its efforts on strengthening existing requirements and proposing new requirements to reduce methane pollution from new and existing oil and gas sources nationwide,” the agency said in an emailed statement.

There’s some reason for that. An estimated 80% of methane leaks from oil and gas sites globally can be captured with existing technology compared to just 32% of the emissions from livestock, according to recent research. And the EPA estimates the oil industry is responsible for releasing about 8 million metric tons of methane annually, though scientists contend emissions are likely some 60% higher.

Rapid advancements in the technology to detect methane leaks -- including through aerial surveillance operations -- will make it easier for regulators, environmentalists and industry alike to document the true scale of the problem and home in on problem sites.

“The methane detection and mitigation industry has really exploded,” said Matt Watson, vice president of energy for the Environmental Defense Fund. “The emergence of new technologies that can quickly and inexpensively identify leaks makes it very easy to go out and tackle these emissions.”

Though many oil and gas companies have voluntarily adopted methane-reduction programs, with some employing drones and laser-equipped airplanes to search out leaks, environmentalists and scientists say faster action is essential. And they will be closely watching whether the EPA seeks equipment upgrades and frequent leak checks at old wells that produce just a trickle of oil but can be super-emitters of methane, despite industry warnings about the potential costs.

Unlike carbon dioxide, which can linger in the atmosphere and soak up the sun’s heat for centuries, methane packs its big heat-trapping punch for about two decades before dissipating.

That makes reductions now the key to constrain global temperatures in the next few years. Slashing worldwide methane emissions 40% by 2030 would shave 0.3 degrees from temperature increases by 2040, according to the United Nations Environment Programme.

Scientists were only beginning to understand the scale of the problem a decade ago, when then-President Barack Obama was extolling natural gas as a clean-burning alternative to coal.

That started to shift in 2012, when the Environmental Defense Fund and EPA launched the first of more than a dozen studies and white papers documenting methane leaks from oilfield equipment. It took years to identify the full extent of the threat.

“We were a little bit slow on the uptake around just how significant the methane problem was,” said Earthworks policy director Lauren Pagel. Politics lagged behind the science, and initially, “there wasn’t much science” to go on, she said.

The EPA moved to directly confront methane leaks during Obama’s second term. But the agency focused on newly drilled and modified wells -- an approach seen as compatible with the political and legal landscape. The Clean Air Act requires a regulatory two-step, with curbs on new sources required before limits can be extended to existing sites. And the EPA was already working on a higher climate priority for Obama: a first-of-its-kind rule throttling greenhouse gas emissions from power plants.

The Obama administration also faced an avalanche of opposition from oil companies and their allies in Washington, who warned aggressive mandates would raise energy prices and quash domestic production. Administration officials sought to stave off intense fights by quietly assuring industry representatives they wouldn’t move to regulate existing oil and gas wells under Obama’s watch, according to two people who asked for anonymity to discuss the conversations.

It was a pivotal decision. When the EPA in 2016 finalized requirements for companies to regularly search for and fix leaks among new and modified sites, the agency didn’t touch already operating wells believed to supply the vast majority of oilfield methane leaks.

At the time, activists “knew we were getting put off; we knew that we couldn’t get them to come back to existing sources,” Doniger said. “But they were inching forward. The goal was to keep them moving forward and hopefully get this in the beginning of the Clinton administration.”

After President Donald Trump was elected, the U.S. government reversed course. Newly appointed leaders at the EPA rolled back most of the 2016 mandates.

And though Congress this year restored the Obama-era requirements, “that was critical time that we lost,” Watson said.

Now, Biden has the political clout to take on the issue, having campaigned on promises to combat climate change. He even singled out methane during his White House bid.

“We’re light years from where we were five years ago,” said Pagel, of Earthworks. “And that makes it much easier for this administration to take a stronger and bolder stance.”