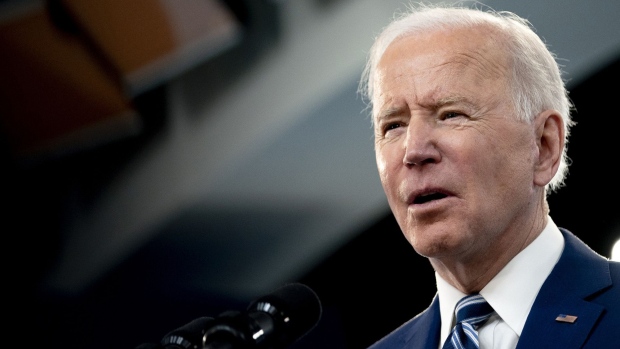 (Bloomberg) -- President Joe Biden will set the number of refugees who can enter the U.S. through September at 62,500, he said Monday, after facing pressure from allies who blasted his earlier abandonment of that goal.

The announcement comes two weeks after the White House said Biden would raise the limit by May 15, but signaled his initial target was not achievable. Biden said his decision to meet his original goal conveys his commitment to creating a more welcoming immigration system, which some of his supporters questioned after his backtracking.

“It is important to take this action today to remove any lingering doubt in the minds of refugees around the world who have suffered so much, and who are anxiously waiting for their new lives to begin,” Biden said in a statement.

At the same time, Biden said the U.S. would not meet its target of admitting 62,500 refugees this year. The U.S. had only processed around 2,000 refugees as of mid-April, according to government figures.

“We are working quickly to undo the damage of the last four years. It will take some time, but that work is already underway,” he said.

The move amounts to a course correction for the White House, which caused confusion with its whipsaw reversals over the refugee limit. Biden acknowledged former President Donald Trump’s historically low cap, which the White House said last month would remain in place, “did not reflect America’s values as a nation that welcomes and supports refugees.”

Congressional Democrats and immigrant-rights activists criticized Biden after officials said he would not raise the refugee ceiling for this year.

Amid the blowback, White House Press Secretary Jen Psaki said later the same day that Biden would raise the limit, but not necessarily to 62,500. Psaki last Tuesday would not say whether Biden was likely to return to his original cap, only saying it would “continue to be challenging.”

Democrats have kept up pressure on Biden to keep meet his goal.

“The United States must reject the previous administration’s cruel legacy of anti-refugee policies and return to our longstanding bipartisan tradition of providing safety to the world’s most vulnerable refugees,” a group of 34 Senate Democrats, led by Majority Whip Dick Durbin, wrote last week in a letter to Biden.

Biden wanted to send a message to the world by raising the cap to his initial target that the U.S. would once again welcome refugees, according to an administration official.

The move would also allow organizations that resettle refugees to begin ramping up their capacity, the official said. Biden administration officials said their previous decision was made in part due to an inability accept larger numbers of refugees after Trump’s cuts.

The U.S. has for decades allowed in tens of thousands of refugees each year who are fleeing persecution or war in foreign countries. Presidents have the power to set annual goals for how many to try and admit, though many years those targets are not met.

Trump lowered the ceiling each year of his presidency as part of his efforts to slash both legal and illegal immigration. The cap was lowered last year to 15,000, the lowest since the Refugee Act of 1980 became law.

Less than a month after taking office, Biden pledged he would raise the refugee cap to 125,000 next fiscal year. He also said he directed officials to work on a “down payment” by lifting the ceiling Trump set for this year as well.

Days after Biden spoke, the State Department notified Congress that the administration intended to raise the fiscal year 2021 cap to 62,500. The Feb. 12 report said such a cap “is justified by grave humanitarian concerns and is in the national interest. The 2021 fiscal year ends Sept. 30.

But Biden did not sign off of the decision as he faced criticism from Republicans that his immigration policies were fueling an influx of migrants arriving at the U.S. southern border. The White House announced on April 16 it would keep Trump’s cap, but, allow in more refugees from Africa and the Middle East.

That announcement angered allies. Biden would not receive political credit from Republicans while would-be refugees would be hurt by the decision, they argued. Immigrant-rights advocates have said raising the cap would create another legal way for Central Americans facing oppression to come to the U.S. without rushing to the border, a stated goal of the Biden administration.

Meanwhile, more than 700 refugees had their resettlement plans canceled before Biden revised the allocations because they were barred under Trump’s categories, according to immigrant-rights groups and Senate offices.

There are more than 30,000 people with conditional approval to resettles as refugees in the U.S., according to the International Rescue Committee.