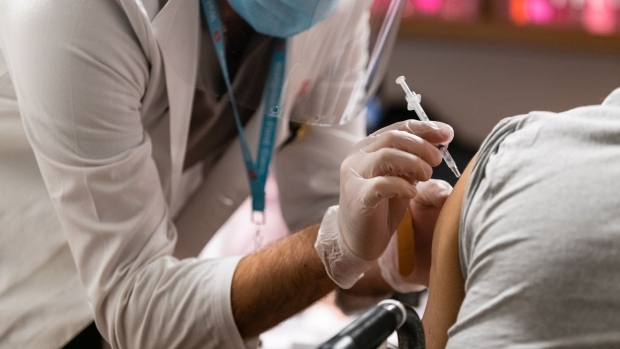 (Bloomberg) -- U.S. Covid-19 cases and deaths are setting records. The vaccination effort is off to a rocky start. Amid these dark days, President-elect Joe Biden has set an ambitious goal of administering 100 million shots in his first 100 days in office, even as he acknowledges this will be “one of the hardest and most costly operational challenges in our nation’s history.”

Leading this effort, one of the toughest jobs in Washington, will be Bechara Choucair, a 47-year-old physician and former commissioner of Chicago’s health department. As the incoming administration’s vaccinations coordinator, he will be in charge of roughly tripling the pace of daily shots to date to meet Biden’s immunization goal.

It’s a challenge that looks even tougher after weeks of slow progress in getting people vaccinated. On Dec. 8, when the shots were still awaiting clearance, Biden announced his 100 million shots in 100 days plan. The U.S. so far has administered about 10.8 million doses, or 37% of shots distributed nationwide.

While the country this week has gotten closer to a rate of 1 million doses a day, meeting Biden’s goal will require further accelerating the pace -- and sustaining it for months.

Choucair, who declined requests for an interview through transition officials, is known among former colleagues as a problem solver with a breadth of experience in health care and policy that will be badly needed to get the vaccination plan on firm footing.

“Health care’s really different, depending on where you’re delivering it,” said Sachin Jain, chief executive officer of SCAN Group and Health Plan, who knows Choucair. “Part of the last-mile problem here is knowing what levers to pull depending on where people are.”

The rollout has been slower than the expectations set by the Trump administration, which aimed to have 20 million vaccines delivered by the end of 2020. The U.S. led development and manufacturing of the shots and took responsibility for shipping them to sites designated by states.

All 64 jurisdictions receiving vaccines -– states, territories and large cities -– have crafted separate plans for distributing them, as the Trump administration has left it to them to figure out how to get shots into arms. Choucair’s charge will be to fulfill Biden’s promise of a more assertive role for the federal government in the vaccination process so the economy can open up.

On a call this week with public health leaders, Choucair wanted to hear about the vaccination campaign from a ground-level view, said Lori Tremmel Freeman, chief executive officer of the National Association of County and City Health Officials.

“We assume he’s going to be a sponge for a little while,” she said. “He was very anxious to learn what is going on across the country, what are the pain points, what are the opportunities to improve the current sort of approach?”

A native of Lebanon who grew up during that country’s civil war, Choucair attended medical school at American University of Beirut. He arrived in the U.S. in 1997 to train at Baylor College of Medicine in Houston. In a book published last year, he described being shocked at the health disparities he encountered in what he imagined would be “a country of almost universal prosperity.” In the book, he recounted how some of his patients in Houston and Chicago suffered from deep poverty and no regular source of health care, similar to his patients from remote villages in Lebanon.

Choucair worked in and then ran clinics in Illinois and was appointed Chicago’s health commissioner in 2009. He held the post for five years and, starting in 2011, worked under Mayor Rahm Emanuel, who had been a chief of staff to President Barack Obama.

“In the time he was in Chicago, there was this whole movement to modernize public health and make it more population based, and Bechara was in the avant-garde,” said Marcus Plescia, chief medical officer of the Association of State and Territorial Health Officials.

The practical sense of how local health departments work from the inside will be valuable for the vaccinations coordinator job, Plescia said. “He has a little more experience in the realities of doing something like this,” he said.

Mansour said Choucair excelled at fixing problems, not just diagnosing them or setting goals. “It’s the work in the middle, how do you get there, that’s hard,” he said.

Choucair left Chicago in 2014 for Michigan-based Trinity Health, one of the nation’s largest hospital systems, and then took a senior job at Kaiser Permanente. He was most recently chief health officer at Kaiser, a sprawling system of hospitals, clinics and health plans that serves more than 12 million members. This summer he was co-lead of California’s Coronavirus Testing Task Force.

In the Biden administration, Choucair will join a group of incoming White House officials whose jobs will also center on the coronavirus crisis. Jeff Zients, a former Obama administration official known for rescuing the troubled healthcare.gov website after the Affordable Care Act was launched, will be Covid response coordinator. Former Surgeon General Vivek Murthy and Yale University Associate Dean Marcella Nunez-Smith will also be top Covid advisers, along with Anthony Fauci, who will be a key holdover from the current administration on Covid policy.

Choucair also will have counterparts devoted to other logistics challenges that have persisted through America’s pandemic response: New Jersey Health Commissioner Carole Johnson will run testing and former Federal Emergency Management Agency official Tim Manning will be in charge of supplies.