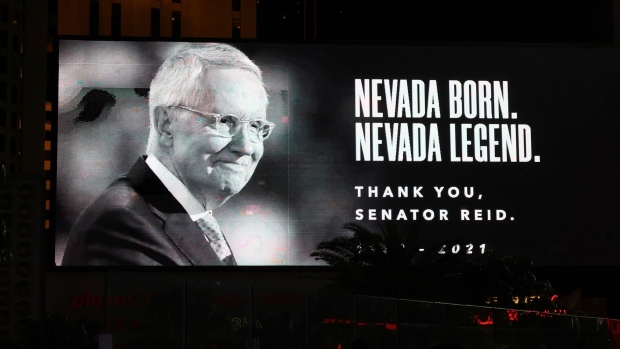 (Bloomberg) -- President Joe Biden called for vigilance in protecting U.S. democracy in a tribute to former Senate Majority Leader Harry Reid as he seeks to rally Democrats behind voting-rights legislation.

“Harry knew better than most how difficult democracy is, that the idea of America itself is under attack,” Biden said Saturday during a memorial service for the longtime Nevada senator in Las Vegas. “Protecting democracy requires vigilant stewardship.”

The appeal came as Biden ratchets up his rhetoric around voting rights, including with a fiery condemnation of former President Donald Trump at an event marking the first anniversary of the Jan. 6 insurrection at the U.S. Capitol by his supporters.

Biden and other Democrats are hoping to convince Republicans to allow them to pass laws that would push back against state-level efforts that limit absentee balloting and tighten identification requirements, or change the rules in the upper chamber to allow them to bypass a GOP filibuster. Republicans have increasingly pursued such efforts after Trump’s defeat in the 2020 presidential election and his claims -- without evidence -- of vote fraud.

Reid changed Senate rules as majority leader to eliminate the 60-vote threshold for presidential nominations except those to the Supreme Court, allowing the confirmation of many judicial nominees submitted by former President Barack Obama.

Many of those Democrats have spent recent days furiously lobbying moderate Democrats — including Senator Kyrsten Sinema of Arizona and Senator Joe Manchin of West Virginia — who say they support voting rights legislation but are reticent to roll back filibuster rules.

Reid, who died last month at age 82, “knew the Senate had to adapt to the changing times,” Schumer said at the memorial service. “He’s right there as we continue the work he dedicated his life to.”

Some Democrats argue the legislation is worth the risk of rolling back filibuster rules. The Freedom to Vote Act would make Election Day a public holiday, force states to allow same-day voter registration and guarantee that all voters can request mail-in ballots. The John Lewis Voting Rights Advancement Act, named for the late Georgia congressman, would extend federal “pre-clearance” of voter laws in states with a history of discrimination.

Reid’s legacy may be to “call on each of us to be our best” and “take up the remaining rounds of Harry’s good fight,” Biden said.

Biden has planned a series of events on voting rights ahead of the Martin Luther King Jr. Day holiday on Jan. 17, which Schumer has set as a deadline for a potential vote on rule changes. On Tuesday, the president and vice president are expected to visit Atlanta to promote the voting rights legislation.

The visit has drawn the ire of a collection of local advocacy groups, including the Black Voters Matter Fund and the New Georgia Project Action Fund, who issued a statement saying that a visit where the leaders offered only “political platitudes and repetitious, bland promises” was “unacceptable.”

White House spokeswoman Karine Jean-Pierre said Friday that Biden wanted to see “concrete solutions” and that the speech was part of the effort.

Biden and other speakers celebrated the legacy of Reid, a five-term senator who helped usher through passage of the Affordable Care Act and the 2009 stimulus bill.

Obama called Reid a “man of old-school virtues” that are “precisely the qualities our democracy requires.”

“We can learn to bridge differences of background, race and region,” Obama said. “He knew our system of government isn’t based on demanding that everybody think exactly the same way. We can still work together.”