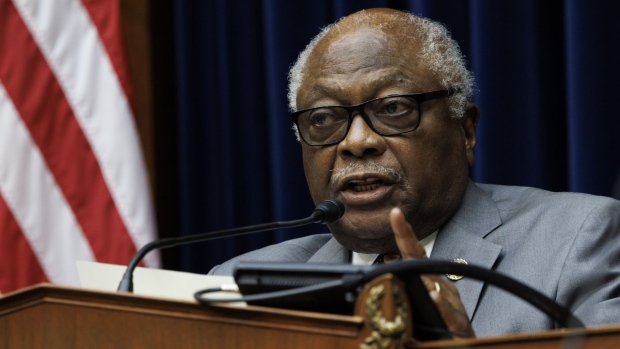 House Majority Whip James Clyburn, a Democrat from South Carolina and chairman of the House Select Subcommittee on the Coronavirus Crisis, speaks during a hearing in Washington, D.C., US, on Thursday, June 23, 2022. The committee released a report this week on the influence a potential herd immunity strategy had on the Trump Administration's pandemic response policies. , Bloomberg

“Absolutely. I want to see him run again, I have told him that, but that decision is up to him and his family,” Clyburn said in an interview Wednesday with Joe Mathieu on Bloomberg Television’s “Balance of Power.”

“I think that if we learned anything in this election, this November, it is this: that people love Joe Biden’s approach, and they are in love with his agenda. That’s why were able to defy all odds and do what we were able to do in defying conventional wisdom,” he added.

Democrats beat expectations by retaining Senate control in the midterm elections and losing the House to only a narrow GOP majority.

In the 2020 contest, Biden struggled early in the Democratic primary before Clyburn’s endorsement helped pave the way for a blowout win in South Carolina, one that reinvigorated his campaign and ultimately vaulted him toward the nomination and the presidency.

Biden, who turned 80 on Sunday and is already the oldest US president on record, has said he plans to run again, but that he’ll likely decide early next year. He arrived in Nantucket Tuesday evening with family for the Thanksgiving holiday.

Biden is making the decision about his 2024 plans as House Democrats undergo a generational shift in their top ranks.

Speaker Nancy Pelosi, 82, said she would not seek reelection to leadership. Majority Leader Steny Hoyer, 83, and Clyburn, who is 82, also will step aside. Clyburn is vying for the assistant leader post in the next Congress.

Asked why Biden’s approval numbers remain sluggish, Clyburn said: “People get enamored with style. There is no substitute for substance, and on substance, Joe Biden is exactly what we need.”