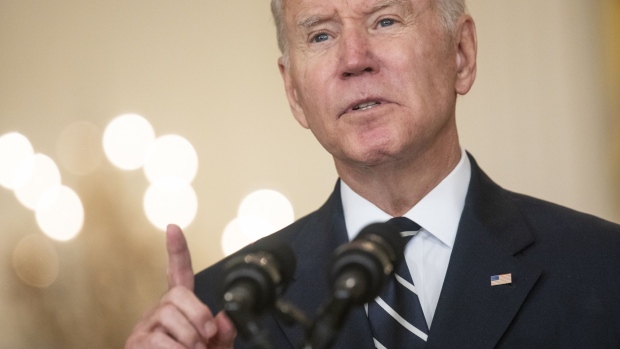 (Bloomberg) -- Detroit automakers would be able to offer $4,500 more in tax credits to U.S. electric car buyers than rivals such as Tesla Inc. and Toyota Motor Corp. under the $1.75 trillion tax and spending proposal unveiled by the White House on Thursday.

The plan calls for all automakers to be able to offer $7,500 to consumers for EV purchases for the first five years of the law, a win for Tesla and General Motors Co., which have been bumping up an existing cap that limits the number of tax credits manufacturers can offer to 200,000.

However, cars made by American manufacturers with union-represented workers would be allowed to offer an additional $4,500 in credits according to a draft text of the bill released by the House that is subject to further negotiation. Tesla and foreign-owned automakers such as Toyota and Honda Motor Co. have argued that would give an unfair advantage to Detroit automakers as the industry races toward an electric future.

The electric car tax credits are part of a $555 billion pot of money in the Democrat-only measure that targets climate change and boost the transition to clean energy sources.

President Joe Biden said the proposal, when paired with an infrastructure bill that has already passed the Senate and has funds for charging stations, will boost the growing market for electric vehicles.

“We’ll build out the first ever national network of 500,000 electrical vehicle charging stations all across the country so when you buy an electric vehicle -- and you’ll get credit for buying for -- you can go all the way across America on a single tank of gas, figuratively speaking,” Biden said in a televised address.

The EV proposal would also allow car buyers to receive an additional $500 for electric cars that are made with domestically-built batteries -- something that would benefit Tesla buyers -- according to the House draft.

Buyers would have the option of taking the credits against their income taxes or at the point of purchase. All the benefits, which are limited to cars under certain sticker prices and subject to income limits, would expire after Dec. 31, 2031.

Used electric car buyers would be eligible to receive $2,000 in tax credits.

The $7,500 credit would apply to all vehicles regardless of where the vehicle is made for the first five years after the bill is enacted, according to the House draft. But in the second five years it will apply only to ones made in the U.S. An additional $500 will be available for any car if the battery is made in the U.S. and $4,500 if the carmarker employs a workforce represented by a union.

“Someone who is a multimillionaire buying a very expensive car is not going to get that credit,” Senator Debbie Stabenow, a Michigan Democrat involved in crafting the agreement with the White House, said.

Detroit automakers have said the proposals to tie EV tax credits to unionization status and the number of domestic parts they have is necessary to protect American workers who stand to risk losing jobs in the nation’s shift from gasoline guzzlers to plug-in cars.

“We support it, because they’re our employees and our employees are important,” General Motors President Mark Reuss said after an appearance at a U.S. Travel Association event in Washington on Tuesday.

Reuss called the tax credits “a proven accelerant to adoption.”

Foreign-owned automakers say that tying electric tax credits to unionization would unfairly disadvantage companies that have been building cars in the U.S. for decades.

“Limiting the tax credit to union-built, U.S.-assembled vehicles and applying these proposed limitations to the current EV market, only two of over 50 vehicles would qualify for the full tax credit,” the CEOs of 12 international automakers, including Toyota, Honda and Volkswagen AG, wrote in a letter to House Speaker Nancy Pelosi on Sept. 30.

The union provision is an “an insult to the 673,000 Americans who work in international nameplate manufacturing plants and dealerships,” Cody Lusk, president of the American International Automobile Dealers Association, said in a statement. The provision also “makes it more difficult for Americans to buy green vehicles, as it can only be applied to a handful of the more than 60 electric vehicles available for sale today.”

A BloombergNEF analysis said the proposed electric car tax credits “would support demand for EVs overall in the U.S. but tip the scale toward U.S. automakers.”

A separate $550 billion infrastructure bill that was approved by the Senate in August on a bipartisan basis includes $7.5 billion dollars for electric charging stations.

Environmental groups said in an increase in the number of tax credits the federal government offers for electric cars is long overdue, citing Biden’s previous pledge to get to at least 50% of the nation’s cars being electric by 2030.

“We’ve been working a long time to update this credit,” Genevieve Cullen, president of the Electric Drive Transportation Association, a trade group for battery, hybrid and other electric drive vehicles, said in an interview.

Cullen said her organization has steered clear of the debate about whether a portion of the tax credit should be tied to unionization status of a carmaker.

“We should be incenting everyone to get into an electric car,” she said. “We want the broadest possible incentive for the broadest number of folks. The market is really poised to grow, but it’s still in early days.”

Marc Boom, director of federal affairs at the Natural Resources Defense Council, agreed, saying the fact that the electric car tax credit survived the intense congressional negotiations shows “there’s a big recognition that we can’t punt on climate change forever if we’re going to meet the goals by 2030.”

“We have to have accessible credits,” he said.

Electric cars only accounted for 2% of overall U.S. auto sales last year. A June Pew Research surveys showed 39% of Americans said that they are at least somewhat likely to seriously consider an electric car the next time they purchase a vehicle.