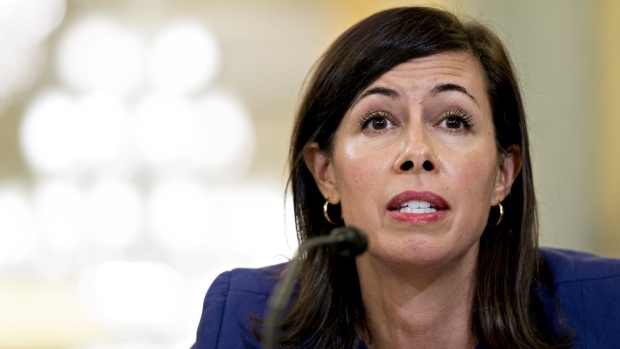 Jessica Rosenworcel, commissioner at the Federal Communications Commission (FCC), speaks during a Senate Commerce Committee hearing in Washington, D.C., U.S., on Thursday, Aug. 16, 2018. FCC Chairman Ajit Pai is testifying for the first time since acknowledging that he incorrectly told lawmakers that the agency was hit by a cyberattack during the height of last year's net neutrality battle. , Photographer: Bloomberg/Bloomberg

(Bloomberg) -- President Joe Biden on Tuesday announced he will nominate Jessica Rosenworcel, the acting leader of the Federal Communications Commission, to become the first woman to serve as permanent chair of the agency.

Biden also announced his intent to nominate Gigi Sohn, a former FCC official, to serve as a commissioner and give Democratic appointees a majority at the agency for the first time in his term.

The appointments, which need Senate approval, would break a partisan split on the commission and clear the way for the agency to fulfill Democratic priorities. Those include restoring net neutrality rules that bar unfair practices by broadband providers, bolstering broadband subsidies and making mobile broadband networks more reliable.

Rosenworcel, 50, has advocated for spreading broadband service to more people, with an emphasis on connecting schools, and has supported net neutrality rules and limits on broadcast ownership. She would be the first woman to have a regular term as chair; earlier, a woman served as acting chair.

Rosenworcel “has worked to promote greater opportunity, accessibility, and affordability in our communications services in order to ensure that all Americans get a fair shot at 21st century success,” the White House said in a news release.

She has been a commissioner since 2012 with an interruption between terms in 2017. She has a law degree from New York University and an economics degree from Wesleyan University.

Sohn is a critic of media consolidation and an advocate of broadband regulation. The White House in its statement called her “one of the nation’s leading public advocates for open, affordable, and democratic communications networks.” Sohn would be the FCC’s first openly LGBTIQ+ commissioner, the White House said.

Sohn is a distinguished fellow at the Georgetown Law Institute for Technology Law & Policy. Earlier, she served as counsel to a Democratic FCC chairman.

Sohn has called for making broadband more accessible and affordable, and for restoring net neutrality rules that were gutted by a Republican-led FCC during the administration of President Donald Trump. She opposed T-Mobile US Inc.’s purchase of Sprint Corp., and before that AT&T Inc.’s failed bid for T-Mobile.

The FCC, with five members at full strength, has been at a 2-to-2 partisan deadlock since the previous chairman, Ajit Pai, a Republican, left in January. Biden named Rosenworcel acting chairwoman as he arrived in office.

Since then Biden’s choice for chair has been a matter of robust speculation, with Rosenworcel long considered a top contender. In September, 24 Democratic senators, and an independent who caucuses with them, called on Biden to select Rosenworcel, saying in a letter “there is no better qualified or more competent person.” Signers included Senator Joe Manchin, the West Virginia Democrat whose support is pivotal for large spending bills that may define Biden’s presidency.

Commissioners are subject to Senate confirmation and serve staggered terms. No more than three can be members of the president’s party.

The nominees along with FCC Democratic Commissioner Geoffrey Starks “will create an FCC ‘dream team’ that can implement a progressive telecommunications policy agenda for the coming decades,” said Andrew Jay Schwartzman, senior counselor at the Benton Institute for Broadband & Society, said in an email.