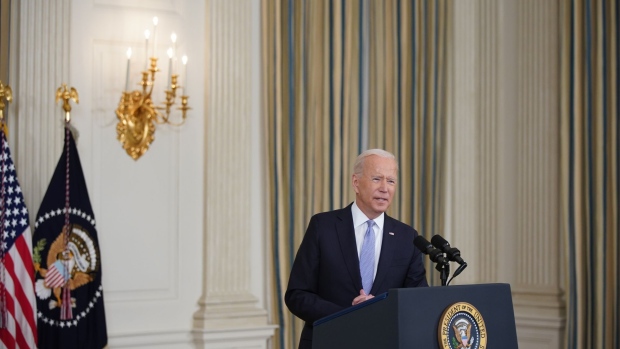 U.S. President Joe Biden speaks in the State Dining Room of the White House in Washington, D.C., U.S., on Friday, Sept. 24, 2021. The U.S. will begin giving Covid-19 booster shots to millions of Americans today, a watershed moment in the nation's battle against the pandemic that officials hope will beat back another brutal winter wave of infections. Photographer: Al Drago/Bloomberg , Bloomberg

(Bloomberg) -- President Joe Biden urged Americans to have patience as Congress considers his multitrillion dollar plans to rebuild infrastructure and reshape the nation’s social safety net, with liberals and moderates in his party sparring over the scope of the legislation.

“We got off to a very fast start with the first piece of legislation,” Biden said Friday at the White House, referring to his $1.9 trillion pandemic relief law that passed in March.

“I don’t expect this to be done, and us be in a position where we can look back and say, ‘Okay, did we get it done?,’ until basically the end of the year,” he said of his larger economic plans. “I don’t mean the vote on the two pieces of legislation relating to the economy, but I think it’s just going to take some time.”

The House could vote as soon as Monday on the Senate-passed infrastructure bill, but the larger package of social spending encompassing much of Biden’s agenda is still being negotiated among Democrats.

House liberals have warned they won’t support the $550 billion public works legislation, negotiated by a bipartisan group of senators without their input, unless the Senate first passes the larger bill.

Senate moderates have expressed alarm at the initial $3.5 trillion price tag for that bill as well as some of the tax increases Biden and progressives have proposed to pay for it.