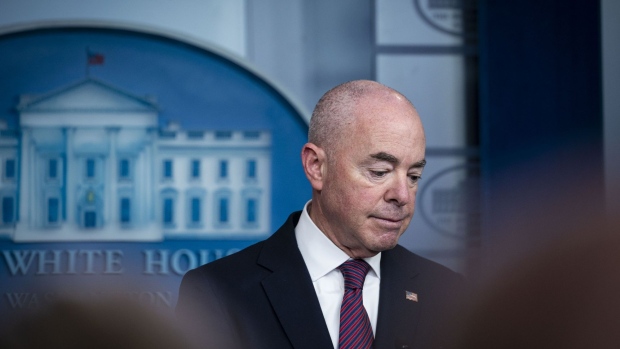 Alejandro Mayorkas, secretary of the U.S. Department of Homeland Security, during a news conference in the James S. Brady Press Briefing Room at the White House in Washington, D.C., U.S., on Friday Sept. 24, 2021. President Biden faces another border crisis as thousands of Haitians try to cross into the U.S. from Mexico, and his administration's response has sparked harsh criticism from fellow Democrats over what they see as inhumane treatment of the migrants. , Bloomberg

Biden, who received his booster shot three weeks ago, isn’t considered at risk because his most recent encounter was more than 48 hours before his positive test and occurred outdoors, the White House said.

Mayorkas tested positive Tuesday morning as part of routine testing before a planned trip, according to his department. He is fully vaccinated, experiencing only mild congestion and will isolate and work from home.

The Bidens and Mayorkas both attended the National Peace Officers’ Memorial Service outside the Capitol building on Saturday. The Centers of Disease Control and Prevention doesn’t recommend quarantine for vaccinated people who aren’t deemed close contacts.