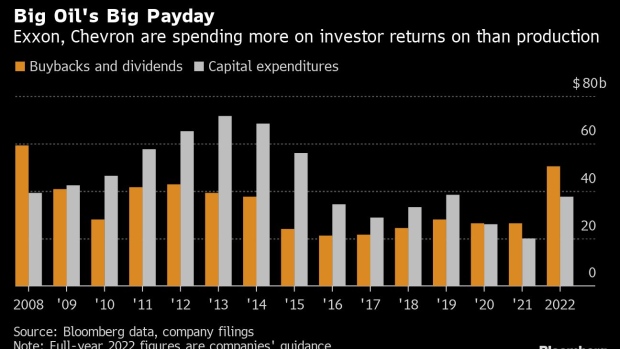 (Bloomberg) -- Big Oil is raking in historic amounts of cash, but the windfall isn’t being invested in new production to help displace Russian oil and gas. Instead, executives are rewarding shareholders -- setting the world up for an even tighter energy market in the years ahead.

The West’s five biggest oil companies together earned $36.6 billion over and above their spending in the first quarter, or about $400 million in spare cash a day. It was the second-highest quarterly free cash flow on record and enough to relegate billions of dollars of Russia-related writedowns to mere footnotes in their recent earnings reports.

Oil booms typically spark a chase for higher production -- but not this time. All five supermajors have kept their capital expenditure budgets firmly in check and pledged that this discipline will hold in future years -- even as oil prices have closed above $100 a barrel on all but five days since Russia invaded Ukraine in February. With wells naturally declining in production every year and large projects taking half a decade or more to come online, any expansion lag happening now will push the possibility of new production even further into the future.

“In prior cycles of high oil prices, the majors would be investing heavily in long-cycle deepwater projects that wouldn’t see production for many years,” said Noah Barrett, lead energy analyst at Janus Henderson, which manages $361 billion. “Those type of projects are just off the table right now.”

In short, if consumers are looking for Big Oil to replace Russian production with any urgency, they better look elsewhere.

The last time crude was consistently over $100 a barrel in 2013, Big Oil’s combined capital expenditure was $158.7 billion, almost double what the companies are currently spending, according to data compiled by Bloomberg. The group includes Shell Plc, TotalEnergies SE, BP Plc, Exxon Mobil Corp. and Chevron Corp.

“Discipline is the order of the day,” BP Chief Executive Officer Bernard Looney told analysts Tuesday. The London-based major isn’t budging on its $14 billion to $15 billion spending plans for the year, with its mid-term guidance creeping up to a maximum of $16 billion despite 10% cost inflation in some parts of its business.

Shell, which posted record profits that exceeded even the highest analyst estimate, was equally clear. In her first set of results as chief financial officer, Sinead Gorman repeated time and time again that Shell would keep within its $23 billion to $27 billion range. “Nothing has changed in terms of our capital allocation framework,” she said.

Instead of spending on new projects, companies are opting to reward shareholders after years of poor returns. Exxon, BP and TotalEnergies increased share buybacks while Chevron is already repurchasing record amounts of stock.

There are clear reasons why Big Oil is choosing not to spend more. Chief among them are climate concerns and uncertainty over the future direction of oil demand. Years of pressure from investors, politicians and climate activists came to a head in the past two years, when all the oil majors pledged some form of net zero target by mid-century. BP and Shell actively positioned themselves to move away from oil and gas over the long-term. All are under added pressure to improve returns that dwindled over the past decade due to cost blowouts and low prices.

Against that backdrop, investment in the upstream oil and gas sector slumped 30% in 2020, while last year’s spend of $341 billion was 23% below pre-pandemic levels, the International Energy Forum wrote in a report.

“Two years in a row of large and abrupt underinvestment in oil and gas development is a recipe for higher prices and volatility later this decade,” warned Joseph McMonigle, Secretary General of the IEF.

That message has not gone down well with consumers around the globe. From Pakistan to Paris, billions of people are suffering a cost-of-living crisis fueled in large part by high energy costs. In the U.S., President Joe Biden has implored oil companies to reinvest profits from surging oil prices into more production to help ease the shortages caused by Russia’s war against Ukraine. Some U.S. and European politicians have called for a windfall tax on companies’ profits to help ease the burden on consumers.

To be fair, that doesn’t mean companies aren’t investing in growth at all. But they will “focus only on low risk, high return assets” such as shale or expanding offshore fields near existing operations, according to Kenney.

Exxon and Chevron, for instance, are spending aggressively to grow production in the U.S.’s Permian Basin, the world largest shale oil region, with planned growth rates of 25% and 15%, respectively. BP is boosting investment in U.S. shale, but the company won’t be able to ramp up Permian production until it finishes building two large gathering systems at the end of the year.

However, most Permian growth will largely offset declines from elsewhere in the U.S. supermajors’ global portfolio, rather than adding to total barrels. Exxon’s first quarter production of 3.7 million barrels per day was the lowest since its merger with Mobil in the late 1990s. Together Exxon and Chevron plan to spend more on buybacks and dividends this year than they do on production.

“For so long the industry has been told by investors and politicians we need less oil and executives remember that,” said Barrett of Janus Henderson. “If the world needs an extra million barrels a day to ease prices, I’m not sure where it will come from.”