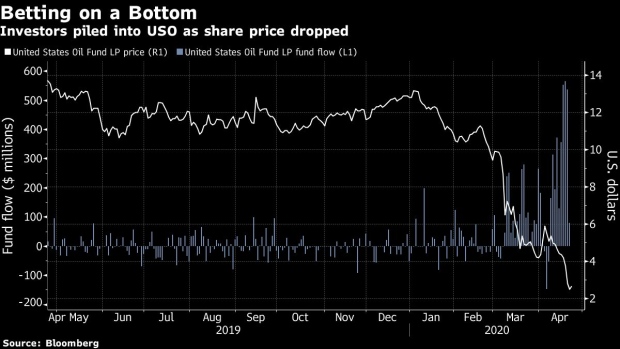 (Bloomberg) -- Figuring out what a stock will do next is never a straightforward affair. But taking a view on the biggest exchange-traded fund tracking oil right now requires levels of understanding that even Wall Street veterans want no part of.

Maybe it’s fortunate that regulations restrict making fresh bearish bets against the U.S. Oil Fund, considering all the moving parts at play. Besides an opinion on ultra-volatile oil prices, a trader needs a view on the price impact of its ever-changing mix of futures contracts, as well as an improbably nuanced understanding of how ETFs work now that it has suspended share issuance. All while the company prepares for a reverse split.

None of this complexity seems to be doing anything to dissuade retail investors from their love-affair with the security and a belief they can use it to profit on oil’s recovery. But with the fund’s holdings in crude contracts apt to change at any time without notice, anyone wading into USO should realize it has stopped being a direct bet on the direction of prices, according to Cantor Fitzgerald.

“Given the way disclosures are currently being given by the fund, it’s almost unanalyzable, because you don’t have a sense of what the weighting along the futures curve is,” said Peter Cecchini, Cantor’s chief market strategist. “There’s nothing you can look at right now because you just don’t know how they’re going to move these things around.”

USO, which for years confined its holdings to front-month contracts, has twice this week loosened rules to allow a much wider mix of futures and other oil-related assets into its portfolio, warning the steps may result in “significant tracking deviations” to its benchmark. Combined with a curtailment of new share issuance, a procedure crucial for keeping the ETF moored to its underlying assets, the security has shown signs of straying from prices in the oil market.

Extending the expiration of the contracts it owns has become a matter of self-preservation for the ETF after May futures, which the fund had already rolled out of, became engulfed in a selling frenzy on Monday that turned their price negative. Losses in the oil market have tended to be worst lately in near-term contracts as concern mushroomed about where to store the crude they deliver.

Regardless, USO has attracted inflows every day since April 8, for a total of about $3.3 billion. Demand for the ETF was so high that the fund exhausted the number of shares it was allowed to issue under past filings. USO had asked the U.S. Securities and Exchange Commission for permission to register an additional 4 billion shares, according to USCF, which runs the ETF.

Until the new shares are cleared by the SEC for issuance, USO will have characteristics of a closed-end fund. That’s caused the fund to become unmoored from its net-asset value, with USO’s premium widening to over 36% at one point this week before returning to roughly 8.5%. Once the new shares are issued, the fund’s price may come back in line with its underlying holdings.

“‘Right now, it’s trading at a premium to net asset value,” said Daniil Shapiro, an associate director at Cerulli Associates. “On one hand, that should benefit the short because that gap is going to close but at the same time, it’s also perfectly possible that that premium continues to become wider and wider.”

In the eyes of Ken Monahan at Greenwich Associates, wagering that USO’s premium will narrow is a risky proposition. Normally, specialized traders known as authorized participants will sell shares of a rallying ETF and purchase the underlying securities to pocket a virtually risk-free profit. However, USO’s share creation halt has disrupted that arbitrage trade, sending USO’s premium higher.

“If you’re going to be shorting that, you have no idea of the duration or the size of that mismatch,” said Monahan, a senior analyst covering market structure and technology. “Unless you’re very confident in your capacity to predict when they will be able to do both sides of the create-redeem arbitrage, you really should not be shorting it because there’s no rational limit.”

Bearish speculators show no more sign of being deterred than bullish ones -- though they’re ability to enter fresh positions has been restricted by SEC rules that kick in when a stock is in free fall. Shorted USO shares tripled from February 27 to April 21, generating roughly $286 million in mark-to-market profits, according to data compiled by S3 Partners. Short interest as a percentage of floating shares has increased to nearly 15.5%.

The cost of betting against USO has climbed in recent weeks as demand to borrow shares for the purpose of selling has increased. USO’s cost-to-borrow jumped to 3.8% on Wednesday from a fee of 1% at the beginning of April, according to the S3 data.

“You have this perfect storm where demand on the short side spikes. Demand is high, supply is low,” said Ben Johnson, co-head of passive strategy at Morningstar Inc. “The cost to borrow these shares will be prohibitively high if you can even find them.”