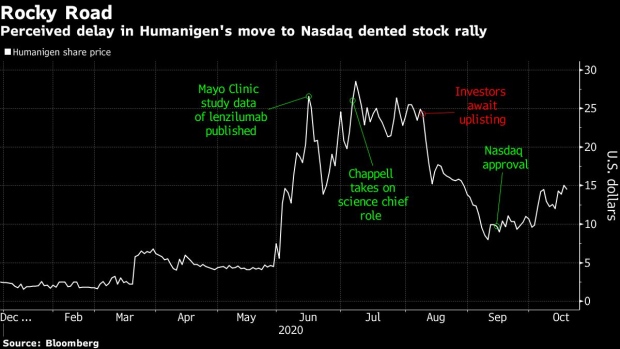 (Bloomberg) -- Biotech investor Dale Chappell was looking to start Humanigen Inc. with a clean slate when his hedge fund assumed control in 2016, but things took longer than expected.

The stock has swelled over 500% this year after positive early results from an experimental treatment for a potentially lethal side-effect of Covid-19. The shares have been volatile since July when it reached a more-than four-year high, though results expected this quarter from a late-stage study may be the ticket to keep Humanigen on track after a roller coaster ride.

Chappell, who has a medical degree from Dartmouth College and served a fellowship with the National Cancer Institute, saw promise in the pipeline of Humanigen, then known as KaloBios, when he first took a stake in 2016. Investors may remember KaloBios as a company teetering on the edge of bankruptcy before the now disgraced and jailed Martin Shkreli swept in and took it over in 2015. Shkreli’s one-month stint as CEO left the company badly scarred before it fell into insolvency.

That’s when Chappell and the fund he founded, Black Horse Capital LP, stepped in to provide financing to get the company back on its feet.

“Maybe naively, I thought that reputational damaged could be fixed pretty quickly with a change in management and board,” Chappell said in a phone interview. “It’s taken a long time, but I think we’re now on the other side of that.”

Along with being Humanigen’s top holder with a 27% stake as of Sept. 18, he’s also the California-based company’s chief scientific officer who once studied the mechanism behind its lead drug candidate.

The medicine, a lab-made molecule known as lenzilumab, targets inflammation and an extreme immune response called cytokine storm. Results from a Humanigen-sponsored study in 300 hospitalized Covid patients are expected this quarter. Lenzilumab was also selected for testing in combination with Gilead Sciences Inc.’s remdesivir by the U.S. National Institutes of Health. The agency-funded study is looking to speed up development of promising medicines for Covid-19.

If positive, results from Humanigen’s study could be enough for an emergency authorization from U.S. regulators and the biotech has manufacturing pacts in place with Thermo Fischer Scientific Inc., Catalent Inc. and the Swiss Lonza Group AG to ramp up production if an authorization is granted.

The company also recently moved up the food chain to the Nasdaq Capital Market after years trading over-the-counter. Since the move, two analysts kicked off coverage of Humanigen, both with a buy rating and more initiations may follow. All of this should be good news for shares, which have pulled back 40% from its July high because some investors had expected a faster move to the Nasdaq.

“I wouldn’t focus so much on the stock price, look at the execution since we’ve moved into Covid-19, one of the most competitive areas of all of biopharma,” Chappell said, pointing to the company’s manufacturing contracts and advancement to late-stage study.

Chappell is looking for the Phase 3 trial to show lenzilumab gets patients out of the hospital in roughly six days, while the control arm -- where patients receive the current standard of care will likely take about nine days to recover. A much smaller study run by the Mayo Clinic showed patients getting lenzilumab recovered in five days.

Other companies are also working on similar treatments although Humanigen appears furthest along. Shanghai-based I-Mab, as well as another entrepreneur-backed company, Vivek Ramaswamy’s Roivant Sciences are testing medicines that also target granulocyte-macrophage colony-stimulating factor, a substance that spurs on the production of white blood cells.

Lenzilumab has an edge as Humanigen has been developing it for the past four years for cytokine release syndrome, according to Chappell. It’s also being tested in a partnership with Gilead’s Kite for use with CAR-T cancer medicines which are known to trigger the immune overreaction.

“We’re all trying to make an impact on this pandemic; there’ll probably be more than one solution,” he said. “I don’t think that we should be thinking about this as a winner-take-all type of strategy.”