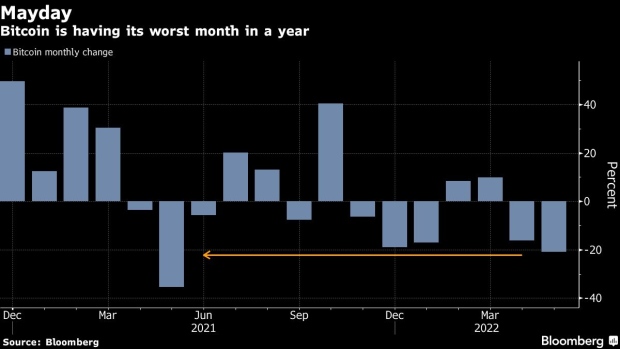 A customer scans a mobile phone QR code on cryptocurrency automated teller machine (ATM) inside a BitBase cryptocurrency exchange in Barcelona, Spain, on Monday, May 16, 2022. The wipeout of algorithmic stablecoin TerraUSD and its sister token Luna knocked more than $270 billion off the crypto sector’s total trillion-dollar value in the most volatile week for Bitcoin trading in at least two years. , Bloomberg

Bitcoin edged above $30,000 on Tuesday in cautious trading as the fallout over a collapsed stablecoin continued to keep sentiment in check.

The world’s largest cryptocurrency rose 1.3% to about $30,300 as of 6:22 a.m. in London. Other coins from Ether to Avalanche also posted modest gains.

Bitcoin is nursing a 21% loss so far in May -- the worst monthly slump in a year -- following last week’s crypto sector turmoil over the collapse of the TerraUSD algorithmic stablecoin and Tether’s brief dip from its dollar peg.

“Small amounts of dip buying tentatively gave Bitcoin a boost, but too much of the retail and institutional world still have massive wounds from the recent collapse,” Edward Moya, senior market analyst at Oanda, wrote in a note.

The stablecoin drama has spurred debate about the future for digital assets and the lessons to learn from the collapse of the TerraUSD ecosystem.

Stablecoin “regulation seems likely” and could lower risk, Goldman Sachs Group Inc. strategists Isabella Rosenberg and Zach Pandl wrote in a note. An alternative “government-backed medium” may even displace them, they said.

The tokens aren’t ready to be used by consumers to make payments, Rohit Chopra, director of the U.S. Consumer Financial Protection Bureau, said in a Bloomberg Television interview.

The tick higher in Bitcoin prices has been accompanied by slightly brighter signs from blockchain trends, according to Darshan Bathija, chief executive officer and co-founder of Singapore-based crypto exchange Vauld.

On-chain data show the number of addresses holding between one to 10 Bitcoins has increased from 689,000 to 694,000 between May 9 and May 19, an “indication of confidence in the cryptocurrency’s recovery,” Bathija said.

The total market value of virtual coins has dropped about $420 billion dollars this month to $1.36 trillion, according to CoinGecko data. Bitcoin is 56% off its record high from November last year.