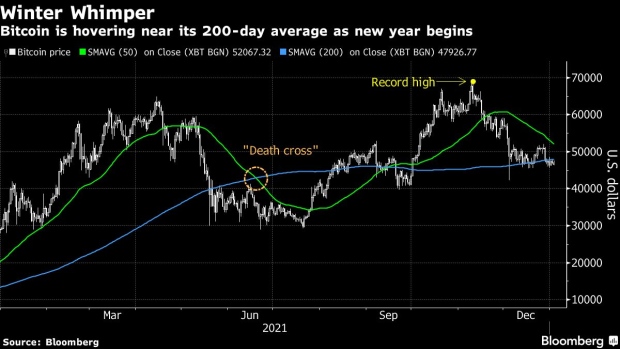 (Bloomberg) -- Bitcoin’s starting off the new year the same way it ended the last one -- with volatility.

The largest digital coin by market value wavered between gains and losses in early New York trading Monday, but was down 1.2% to $46,452 as of 12:17 p.m. That means it was wobbling below its average price over the last 200 days, which currently stands at $47,927. The session is setting Bitcoin up for its seventh consecutive close below that threshold, which is watched closely by chartists.

Strategists at Oppenheimer say Bitcoin’s heightened volatility makes it difficult for them to trade. Still, if they use its 200-day moving average stat in the same way they utilize it for stocks, then they foresee it could break above $65,000 -- as long as it maintains $46,000, they said in a note.

Cryptocurrencies overall finished 2021 on a sour note -- Bitcoin fell roughly 19% in December, one of its worst months of the year. The Bloomberg Galaxy Crypto Index, which tracks a handful of some of the largest coins, lost near 23% in that period.

“We wonder if portfolio window dressing had an impact on keeping the asset class down throughout most of December,” wrote Matt Maley, chief market strategist for Miller Tabak + Co. “And that this same issue just might help it bounce back nicely in the New Year.”

That’s a refrain often heard in the crypto sphere -- as fast as prices dropped, they can recover just as quickly too. Those watching its wild gyrations say the volatility is par for the course and is, by now, a given in the world of digital currencies.

Many analysts say that going forward, crypto prices are likely to recover. Some see much further upside, with strategists predicting $90,000 or $100,000 in the cards this year.

“As we start to look ahead and say what’s the future for crypto, it likely is brighter than the month of December manifested,” Art Hogan, chief markets strategist at National Securities, said by phone. “But it’s never going to be a smooth path and it’s certainly going to be fraught with a great deal of volatility.”