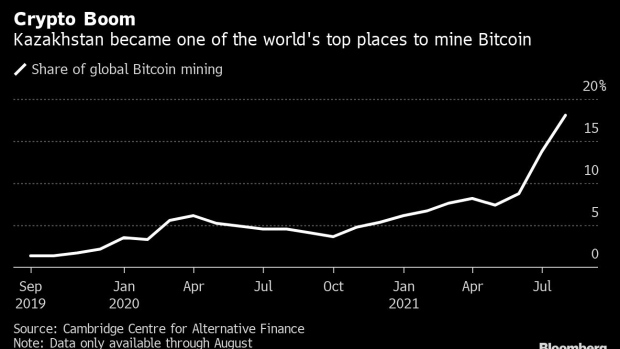 Lights illuminate USB cables inside a 'mining rig' computer, used to mine cryptocurrency, in Budapest, Hungary, on Wednesday, Jan. 31, 2018. Cryptocurrencies are not living up to their comparisons with gold as a store of value, tumbling Monday as an equities sell-off in Asia extended the biggest rout in global stocks in two years. , Bloomberg

(Bloomberg) -- Kazakhstan’s Bitcoin-mining boom ended even quicker than it started.

A squeeze in the central Asian nation’s power supply has pushed the government to place big limits on the energy-intensive industry. The rapid reversal has eliminated one of the cheapest places to mine the cryptocurrency just as Bitcoin's rise this year has made the process more profitable.

“It’s like night and day,” said Almas Chukin, partner at Almaty-based private equity firm Visor Kazakhstan, which has invested in the construction of renewable energy and data centers. “There’s zero potential for Bitcoin mining at the moment in Kazakhstan.”

Kazakhstan emerged earlier this year as one of the world’s winners to attract Bitcoin miners after China cracked down on the practice. Producing the world’s biggest cryptocurrency requires special computers that work to solve complex encrypted problems, and the biggest operating expense for the business is electricity. Kazakhstan’s pitch was simple: the country’s cheap and abundant coal power would make it one of the world’s most profitable places to do business. And the miners rushed in. By August, Kazakhstan had become the second-largest Bitcoin mining country in the world after the U.S., according to data from  Cambridge Centre for Alternative Finance.

In October, Kazakhstan faced a shortfall of electricity after the country’s largest power station had to shut two units for maintenance with a combined capacity of 1,000 megawatts, roughly 5% of the country’s power supply. At the same time, electricity demand was surging. In the first nine months of the year, the country experienced additional power use during peak hours equivalent to the Almaty region, the most populous part of the country. Much of that came from the miners.

There are about 50 registered cryptocurrency mining data centers; as of October, they were consuming almost 700 megawatts of power. There are also unregistered operations, known as gray miners, that needed an additional 250 megawatts, the Energy Ministry said.

Electric grids require a precise balance between demand and supply. With so much generation unavailable, Kazakhstan began to target the miners to prevent the power grid from suffering blackouts.

Kazakhstan's energy ministry considered issuing an order to restrict power consumption by new cryptocurrency miners, but after public discussion in October dropped the plan. It amended existing legislation instead, allowing grid operator Kegoc to limit or reduce power supply to digital miners in the event of a power deficit and to avoid emergency situations.

Didar Bekbauov, who runs Almaty-based Bitcoin-mine hosting company Xive, received an inquiry in September asking him about his company’s operations. After the metallurgical site where Xive and three other mining companies were located filled out the government’s paperwork about their activity, the power started to cut off. At first he was without power about 50% of the time, then 80%. After a few weeks, power was shut off completely.

“They’re trying to make mining a scapegoat, telling everyone that because of miners there was a super load of electricity,” Bekbauov said by phone. “Miners in Kazakhstan are very unhappy now.”

Ultimately Bekbauov had to close the larger of his two mining facilities, a 10-megawatt operation in Taraz in southern Kazakhstan. Some of his investors shipped their machines out of the country to Russia and the U.S.

Bekbauov is also looking to set up an operation in the U.S. But he hasn’t abandoned Kazakhstan entirely. He’s preparing to build a larger mine in the northern part of the country. Rather than get power from the grid, the new facility will buy gas directly from a new power station being built on the site of where the fuel is extracted. Xive entered into a long-term deal to buy the gas earlier this year, before the global spike in prices.

Kazakhstan isn’t the only country where the promise of cheap power has soured for Bitcoin miners. In Iceland, a lack of power has caused the island’s main utility to reduce supplies to some industrial customers and turn away new Bitcoin miners.

While some companies may be able to continue in Kazakhstan, the country will likely remain a small player in the global Bitcoin mining market. Earlier this year, Denis Rusinovich was looking to build a Bitcoin-mining operation that could use as much as 100 megawatts of power. Now, the founder of Switzerland-based Maveric Group AG, which invests in cryptocurrency mining, sees the country as a niche opportunity, even as power from the giant coal station returns to normal.

“Six months ago or even last year you could talk about multiple mega sites in Kazakhstan,” Rusinovich said. “If you look now, you can forget about this.”