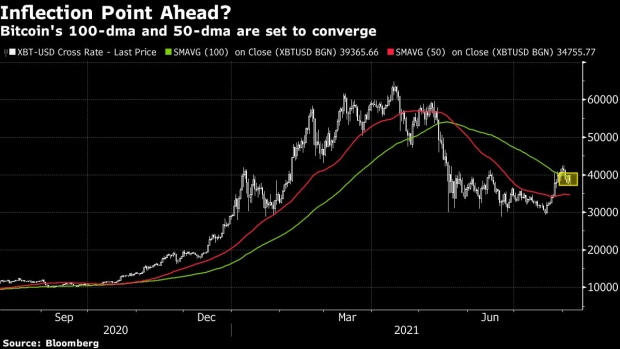 (Bloomberg) -- Bitcoin is striving -- and failing -- to break above key technical hurdles this week, moving lower toward a major inflection point instead.

Bitcoin has flirted with regaining the $40,000 mark all week but has failed to do so, showing strong resistance at that threshold. Additionally, the coin has tried to close above its 100-day moving average over the past four sessions but is struggling with that as well.

“Bitcoin is back in negative territory after prices ran into a wall of resistance around $40,000,” Craig Erlam, a senior market analyst at OANDA, said in a note. “Perhaps profit taking hasn’t run its course just yet.” He sees $36,000 as a key level to watch -- it coincides with resistance seen in late June and early July and also represents a 50% retracement of the move from the recent lows to highs.

Bitcoin fell as much as 6.1% during New York-trading hours on Thursday to $37,326. That’s its lowest level in more than a week. It snapped a three-day losing streak Wednesday. The Bloomberg Galaxy Crypto Index, which tracks some of the biggest digital assets, fell a similar amount.

Though supportive comments from billionaire Elon Musk and Ark Investment Management LLC’s Cathie Wood, as well as speculation over Amazon.com Inc.’s possible involvement in the cryptocurrency sector, had helped Bitcoin rally in recent days, it has retreated since as it comes into greater focus for regulators. Though some strategists said it was due for a pullback, others cited a new push by Congress to require crypto brokers to report transactions to the Internal Revenue Service, a move that could create some unwelcome tax bills.

Meanwhile, U.S. Securities and Exchange Commission Chair Gary Gensler signaled that regulators may be more open to a Bitcoin ETF if it were based around futures rather than the cryptocurrency itself. A lot of crypto fans, many of whom had been hoping for a different structure, were disheartened by the news.

“We don’t advise any of our clients to go into it,” Carter Henderson, portfolio manager at Fort Pitt Capital Group, said by phone. “Right now, it’s too unknown of a space to be in and two, the volatility of wealth management clients to be in an asset class like that doesn’t fit the risk profile.”