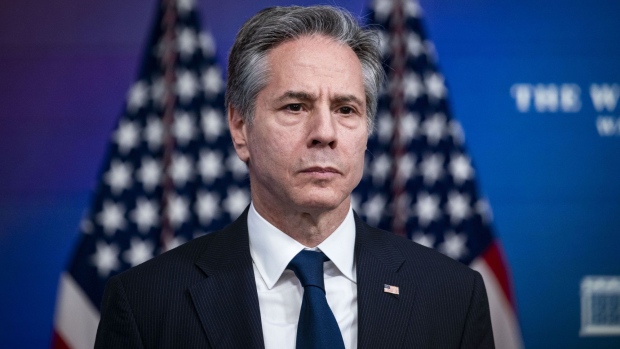 (Bloomberg) -- Secretary of State Antony Blinken will deliver a long-promised speech Thursday setting out US policy toward China at a time when Washington is sparring with Beijing over everything from trade and human rights to Russia’s invasion of Ukraine.

The speech, intended to outline a broad strategy toward the world’s second-largest economy, comes after months of delays and internal deliberations.

Blinken was forced to cancel an opportunity to deliver his remarks earlier this month after he tested positive for Covid-19. America’s top diplomat has also been preoccupied with organizing global support for Ukraine following Russia’s invasion and coordinating punitive sanctions against President Vladimir Putin’s regime.

It’s the latest example of other world crises -- from the Middle East to Eastern Europe -- undercutting an American president’s pledge to “pivot” toward Asia and the challenges posed by China as the top focus of defense and foreign policy.

A speech that could have set the stage for President Joe Biden’s trip to Asia will come instead just after he returns. Biden generated controversy while in Japan by saying “yes” when asked whether the US would intervene “militarily” if China sought to seize control of Taiwan by force, undercutting a longtime US policy of “strategic ambiguity.”

Although Blinken’s speech will be watched closely for insights into how US policy toward China may be evolving, it’s not expected to offer much that’s new to help guide policy makers, analysts and markets, according to people familiar with his planned remarks who spoke to Bloomberg News earlier this month on condition of anonymity.

The State Department said the secretary’s remarks will take place at 10 a.m. local time on Thursday at George Washington University.