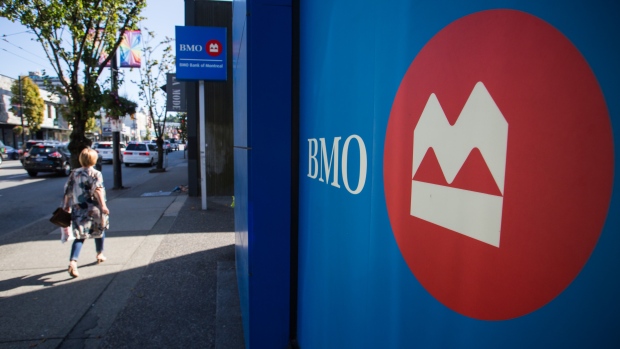 A pedestrian passes in front of a Bank of Montreal branch in Vancouver, British Columbia, Canada, on Friday, Aug. 25 2017. , Ben Nelms/Bloomberg

A team of Bank of Montreal commercial bankers have traded their suits and ties for Ford F-150 pickups to reach Canada’s remote regions and build up a part of their business that has yet to see a bad loan.

Indigenous banking is one area Chief Executive Officer Darryl White targeted in June when he vowed increased support for small-business lending and sustainable finance, as well as inclusiveness and diversity. The Toronto-based bank plans to double the size of its $4.4 billion book of indigenous commercial loans, deposits and investments by 2025.

“We should actually exceed that by a bit,” Stephen Fay, head of indigenous banking, said in an interview at his Toronto office. “I’m confident we can do it just by doing what we’ve done in the past.”

Fay thinks he can beat his boss’s target even as he faces competition to reach the indigenous population, Canada’s fastest-growing group, from rivals including Royal Bank of Canada, Toronto-Dominion Bank and Canadian Imperial Bank of Commerce, as well as new entrants such as private lender Bridging Finance Inc. Growth at Bank of Montreal’s division has been about 21 per cent so far this fiscal year, surpassing its historical pace and above Fay’s annual goal of 19 per cent.

Bank of Montreal started an aboriginal banking unit in 1992 with Ron Jamieson, a Mohawk from Six Nations Reserve in Ontario, running the business. He led a lean operation in the early years, with a handful of bankers lending, gathering deposits and establishing on-reserve housing-loan programs. Then Fay was tapped for a commercial-banking deal, his area of expertise.

“I was able to do an infrastructure deal there,” Fay, 62, said. “It took me about six months of hard work trying to gain their trust, but we were successful and Ron liked how I did it.”

Jamieson asked Fay to join his team. Fay has headed the unit since 2009, and now oversees eight dedicated bankers across Canada, who are supported by about 60 account managers along with experts from other parts of the bank.

Clients are not always easy for the bankers to reach. In Quebec, for example, Bank of Montreal has on-reserve branches at Wemindji and Waskaganish on the James Bay coast, two remote communities linked by a road that takes eight hours to traverse.

“All, with the exception of one, have an F-150 because what I found was the previous vehicles we were giving them when they were going into these remote communities would get damaged on some of the roads,” Fay said.

“Picking up the phone and using text is not going to work,” he said. “You go into the community and spend time talking to people. You may not even talk about business in the first one or two visits, but you’re going to get to know people and build that trust and then try and find a way to provide value.”

Membertou First Nation, an urban Mi’kmaq community of 1,700 on the east coast’s Cape Breton Island, has dealt with Bank of Montreal for almost a decade, a relationship that began with a cold call from Fay, said Mike McIntyre, Membertou’s chief financial officer.

The two built up a dialogue and the first deal was a $700,000 loan to buy a garage for housing public-works equipment, McIntyre said. The bank has since provided more than $20 million for on-reserve housing, fishing boats and a sports complex.

“They get it,” McIntyre said. “These guys are sincere and the people they have working for them strictly deal with First Nation banking.”

The biggest deal for Bank of Montreal’s indigenous banking unit this year was about C$80 million, involving a real estate development in western Canada. About 70 per cent of the unit’s loans are less than $20 million. Other areas of banking include providing on-reserve home loans, cash-management services, infrastructure finance and helping indigenous groups with land-claims settlements, which have resulted in trusts that spin off income.

The bank has set up 122 on-reserve housing-loan programs, an initiative started in 1995 and designed to permit loans even with Indian Act restrictions on land ownership and mortgages. Under the programs, the borrowing risk falls to both the bank and the community.

Indigenous banking has also proven to be a low-risk venture, more akin to lending to cities and other governments since the main borrowers are the band or wholly owned entities.

“We’ve had no write-offs and, if you ask the other banks, they’ll tell you the same thing,” Fay said. “We look at First Nations or indigenous governments as a government: They’ve got elected chiefs and councils, they are here for the long haul and are not going to go away.”