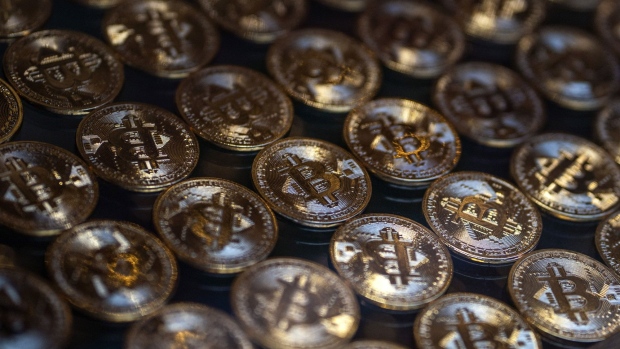 Illustrative bitcoin tokens in the window of a cryptocurrency exchange kiosk in Istanbul, Turkey, on Monday, Nov. 8, 2021. Bitcoin and Ether hit all-time highs in a cryptocurrency rally that some analysts attributed partly to the search for a hedge against inflation. , Bloomberg

(Bloomberg) -- Bank of England Governor Andrew Bailey said El Salvador’s decision to adopt Bitcoin as its currency was concerning because consumers probably will be caught out by its volatility.

“It concerns me that a country would choose it as its national currency,” Bailey said in response to a question at an appearance at the Cambridge University student union on Thursday. “What would worry me most of all is, do the citizens of El Salvador understand the nature and volatility of the currency they have.”

He added that the International Monetary Fund, which monitors risks to global financial markets, is not happy with El Salvador. The BOE is studying whether to create its own digital currency system to smooth online payments and give consumers a secure way of holding cash that will keep up with technology.

“There is a strong case for digital currencies, but in our view it has to be stable, particularly if it’s being used for payments. That is not true for crypto assets.”