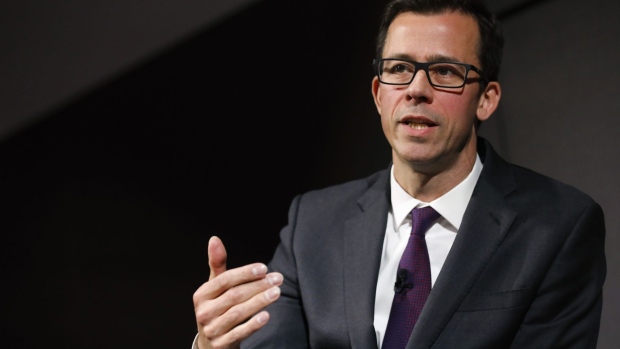 Gertjan Vlieghe, policy maker at the Bank of England (BOE), gestures while speaking at the 2019 Monetary and Financial Policy Conference at Bloomberg's European headquarters in London, U.K., on Tuesday, Oct. 15, 2019. Continued Brexit uncertainty would probably depress U.K. economic growth and require further monetary stimulus from the Bank of England, according to Vlieghe. , Bloomberg

(Bloomberg) -- Interest rates may stay at historically low levels for decades, according to Bank of England policy maker Gertjan Vlieghe.

Asked on a webinar Monday how long it could be until borrowing costs reach the kind of levels seen as normal before the global financial crisis, Vlieghe replied “maybe not in my lifetime.” He added that rates during the 1970s and 1980s were unusually high, so lower levels would better represent the average.

“We’re going through one of these very long term, low interest rates periods again,” he said. “It’s going to be with us for another decade, maybe another two. It doesn’t mean interest rates don’t go up from current levels. It just means that when they go up, they don’t go back to 4% or 5%.”

He pointed to people living longer and building up savings as being one of the reasons for the shift.

Vlieghe’s comments add to the ongoing debate over how long governments can rely on borrowing costs to stay low after ramping up spending to tackle the economic fallout of the Covid-19 crisis.

Until the financial crisis a decade ago, the Bank of England never cut its benchmark lending rate below 2% since it was founded in 1694.

Since March, the BOE has cut the rate to a record-low 0.1% and more than doubled its asset purchase target, helping to suppress the cost of debt while Chancellor Rishi Sunak has spent almost 300 billion pounds ($422 billion) in response to the pandemic.