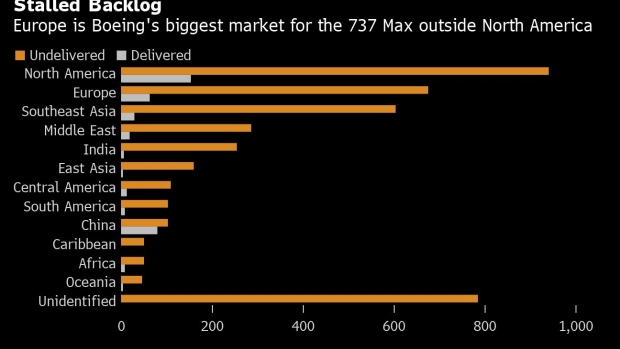 (Bloomberg) -- European and Canadian regulators are still wrangling with Boeing Co. over the last remaining technical details of its 737 Max revamp, leaving some customers to worry that certification in critical markets outside the U.S. could slip to next year.

In a rare bit of good news for Boeing and its beleaguered jet line, the Federal Aviation Administration on Aug. 3 triggered a process that could lead to reissuance of a U.S. airworthiness certificate for the Max as soon as October.

Yet international regulators say they aren’t ready to follow suit. The European Union Aviation Safety Agency is still waiting for more clarity from Boeing on a key update to be carried out after the plane is back in the air, according to people familiar with the matter.

And Transport Canada, it its most detailed comments to date, said Monday that its concerns haven’t been fully addressed about how to quiet erroneous activation of the Max’s “stick shaker,” which can distract pilots and add to their workload in an emergency.

China, the world’s second-biggest aviation market, has meanwhile said very little about its plan to evaluate the Max.

Winning U.S. approval by October might make it possible for commercial flights to occur before year-end. That would allow Boeing to finally start generating revenue again from its most popular model. The Max was grounded in March 2019 following the second of two crashes that killed 346 people.

While the FAA, the Max’s main certifying body, was always expected to be first to clear its return, a significant time gap with Europe or China, for example, could damage the outlook for the jet’s commercial revival. It would also potentially hamstring international airline customers such as Ireland’s Ryanair Holdings Plc or tour operator TUI AG, and slow progress toward a top Boeing priority: a return to positive cash flow.

Both Air Lease Corp., one of the largest aircraft leasing companies, and ratings firm Standard & Poor’s have expressed caution about how long it will take for the jet to gain approval to fly again outside the U.S.

International clearances may be delayed “by a few months, due in part to travel restrictions and other logistical issues caused by the coronavirus,” S&P said last week.

EASA’s concerns about the 737 Max’s lack of a third angle-of-attack sensor haven’t been fully addressed, said several people familiar with the matter who asked for anonymity discussing private interactions over the plane’s return.

The device, which monitors whether a plane is pointed up or down relative to the oncoming air, malfunctioned in both Max crashes, triggering the automated system that pushed the doomed flights into a dive.

The FAA and EASA clashed last year over how to approach a fix, finally reaching a compromise involving an upgrade to be installed by Boeing after the planes were flying again. The company has proposed using existing sensors and the plane’s computers to synthesize the action of a third angle-of-attack sensor without the expensive hardware addition, according to people familiar with the matter.

EASA is seeking more clarity from Boeing on its timetable for making the revisions after the Max resumes commercial service, including milestones to track progress toward implementation, two people said.

However, one person familiar with discussions on the issue said that this is not expected to hold up EASA’s decision on lifting the flight ban.

Boeing has said it expects the Max to receive FAA clearance during the fourth quarter.

“We continue to make steady progress towards safely returning the airplane to service, working through the rigorous process laid out by the FAA, EASA and other authorities,” Chicago-based Boeing said in a statement. “Safety remains our priority and the regulators will continue to determine the schedule for return to service.”

Last week, the FAA said that Boeing’s redesigned software had “demonstrated compliance” with EASA requirements. But EASA signaled there were still issues to be resolved beyond test-flight scheduling.

“Good progress has been made but there is still some work which Boeing needs to complete,” EASA said, declining to elaborate.

Canada too has signaled that it’s not yet comfortable that the changes outlined by the FAA last week go far enough.

The FAA’s proposed fixes, now under a 45-day review period, would ensure that the safety feature that malfunctioned in the crashes, known as the Maneuvering Characteristics Augmentation System, can no longer trigger the repeated dives that brought down the planes. Boeing was also required to use its flight-control computer to compare readings from both angle-of-attack sensors to give pilots more awareness of a failure.

On Monday, Canada reiterated its demand to address the so-called human factor that’s been discussed in the wake of a Max crashes as a potential contributing factor when an array of alarms and warnings can overwhelm pilots and contribute to airliner disasters.

Transport Canada wants to give pilots the option disable the stick shaker -- a warning mechanism that noisily vibrates the plane’s control yoke -- when it has been erroneously triggered. The regulator contends that this would reduce pilot workload and distraction.

As proposed by Boeing, the stick shaker could only be deactivated by pulling a circuit breaker, Livia Belcea, Press Secretary for Transport Minister Marc Garneau, said on Monday. Boeing has been discussing a modification that would be installed after the plane returns to service, Belcea said.

“Transport Canada will not lift the flight restrictions on the Boeing 737 Max 8 until the department is fully satisfied that all safety concerns have been addressed by the manufacturer and the U.S. FAA, and that enhanced flight crew procedures and training are in place,” Belcea said. “If deemed necessary, Transport Canada will require supplementary procedures and training in Canada.”

While disagreements between regulators are not unusual, they have played out in a more public way in the wake of the 737 Max crisis. Airline regulators have historically projected a fairly unified front, striving to adopt more uniform rules and only rarely disagreeing on major safety issues. Regulators that oversee jetliner manufacturers -- the EU, the U.S., Canada and Brazil -- are the world’s leaders. That atmosphere was shattered by the Max crisis, which raised questions about the FAA that punctured its reputation as the gold standard in aviation safety.

Regulators have since sought to demonstrate independence. Rising nationalism over trade and other matters hasn’t helped, while the coronavirus also slowed collaboration.

“We hope that FAA certifications of the Max will occur this year,” Air Lease Chief Executive Officer John Plueger said on a post-earnings conference call last week. “We have somewhat less confidence that certification by the end of the year will be achieved by all foreign regulators including EASA and China.”

A long European delay combined with Brexit could potentially cause a headache for TUI, the tour operator with part of its fleet licensed in the U.K. After a temporary transition deal runs out in December, Britain’s Civil Aviation Authority will take over aircraft certification from EASA. The agency is still recruiting technical experts to carry out its own evaluations, according to a person familiar with the matter.

While a decision hasn’t been made on how the agency would handle the Max certification, the CAA would most likely follow along with EASA testing, said the person. This would minimize any additional impact on TUI or other U.K.-licensed carriers.

With much of its fleet still grounded and a focus on travel during warmer months, a certification delay would only have a significant effect on TUI if it couldn’t get its planes back in service by April, TUI CEO Fritz Joussen has said. That’s when the Easter break signals the start of Europe’s travel season.

In a statement, the CAA said it’s working closely with EASA on the Max and will be ready to take over at the end of the Brexit transition period.

To be sure, airlines won’t broadly see an impact unless the Max’s comeback drags past winter’s end. The virus has pushed traffic so low that most don’t need the planes right now. And should the differences get sorted within the FAA review period, the gap with the U.S. may be minimal.

For Boeing, which is sitting on some 450 undelivered Max jets, a slower return would hamper its ability to hand the planes over and collect final payments. Some customers, such as Ryanair, have said they’ll try to get delivery schedules accelerated.

Other regions will follow Europe’s lead. Regulators in India, for example, will wait for both the FAA and EASA to recertify the plane before allowing it to fly there, according to a person familiar with the matter.

China, the second-largest aircraft market, remains a wild card. It was the first country to ground the Max in 2019 and hasn’t said much about how it’s evaluating the return. Political tension has been rising with the U.S. on fronts including a trade deal, freedoms in Hong Kong and data security.

Max customers said they had little insight into the process and expected that the friction was slowing it down. China also hasn’t taken any 787 Dreamliner deliveries this year, which has been taken as a negative sign.

The government bodies primarily responsible for overseeing China’s aviation industry include the National Development and Reform Commission, the Civil Aviation Administration of China, and the State-owned Assets Supervision and Administration Commission.

The three agencies didn’t respond to faxed questions about how China will determine the plane’s airworthiness and whether domestic airlines plan to accept deliveries.