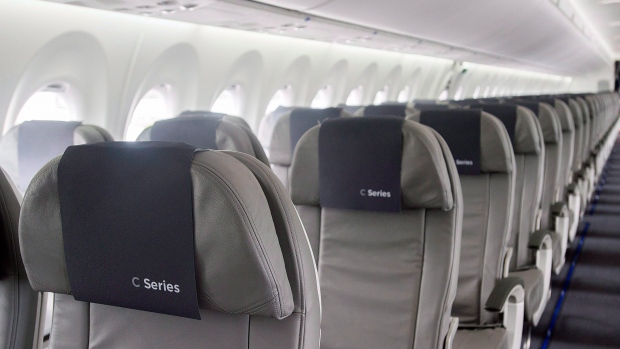 MONTREAL - Bombardier may have to wait an extra two months to find out if its CSeries commercial jets will be hit by punishing U.S. duties.

Boeing (BA.N) has requested that the U.S. Commerce Department delay its preliminary determination on its petition until Sept. 25 from July 21.

In April, Boeing petitioned the U.S. Commerce Department and U.S. International Trade Commission, alleging that the Montreal company has been selling CSeries planes in the U.S. below cost thanks to public subsidies in violation of trade rules.

Bombardier (BBDb.TO) has rejected the allegations and argued that their CSeries planes never competed with Boeing in a key sale to Delta Airlines.

It wasn't immediately clear Wednesday when the U.S. Commerce Department will decide on the U.S. aircraft maker's latest request.

Boeing said respondents such as Bombardier have been granted several extensions and that the complexity of the financial support provided to Bombardier requires that the investigation take more time.

"It is important that the department have sufficient time to investigate each of these subsidies thoroughly," Boeing wrote in its letter.

The Bombardier-Boeing dogfight has also taken on a political dimension. The Canadian government said it is reviewing bids from the Chicago-based company for military contracts, a hint that Ottawa may be reconsidering its purchase of Boeing's Super Hornets.