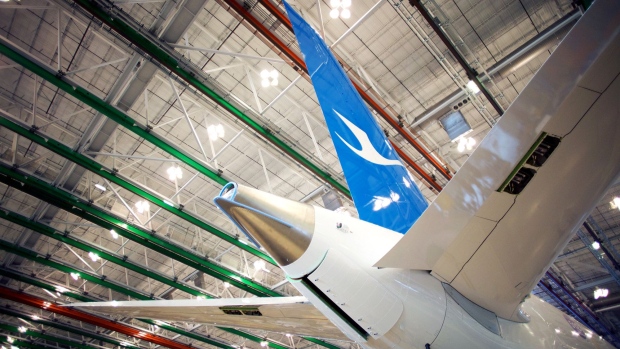 The tail of a Boeing Co. Dreamliner 787 plane is seen on the production line at the company's final assembly facility in North Charleston, South Carolina, U.S., on Tuesday, Dec. 6, 2016. On the day President-elect Donald Trump lashed out at Boeing Co. for the cost of replacing Air Force One, mechanics and engineers at the planemaker's South Carolina factory were focused on another challenge: making the first 787-10 Dreamliner. The manufacturer is counting on the newest and longest Dreamliner to help turn its marquee carbon-fiber jet into a cash machine. Photographer: Travis Dove/Bloomberg , Bloomberg

(Bloomberg) -- Frustration is mounting for customers waiting to take new Boeing Co. 787 Dreamliners -- planes caught in a regulatory and production quagmire that has halted all but a few deliveries since October 2020.

The popular wide-body jets will be needed to carry travelers across oceans as borders sealed shut by the Covid-19 pandemic start to reopen. But airlines and lessors trying to plan for the expected rush of travelers don’t know when their Dreamliners will arrive -- only that it won’t be this year, as Boeing executives once said.

“The story line from Seattle has been manana, manana, manana,” Steven Udvar-Hazy, chairman and co-founder of Los Angeles-based Air Lease Corp., said of Boeing’s commercial division, which is based in Washington. “In July they said, ‘Oh, by August we’ll be fine.’ Then in August it was September. We have 11 aircraft that are ready and we can’t get them delivered.”

More than 100 Dreamliners are stuck at Boeing, tying up inventory worth about $20 billion by Air Lease’s calculation and hampering the planemaker’s financial turnaround and efforts to pay down its $62 billion debt.

Boeing is working to find and repair tiny structural imperfections about the width of a piece of paper in the carbon-fiber aircraft while addressing quality lapses among suppliers and their subcontractors. Both issues came to light as the Chicago-based planemaker did a deep dive in its factories and production system in the wake of two fatal crashes of its 737 Max.

“We are conducting inspections and rework and continue to engage in detailed, transparent discussions with our regulators, customers and suppliers,” Boeing said in an emailed statement. “We know this important work has impacted our deliveries. While we never want to disappoint or cause delays for our customers, quality and safety always come first. These actions are essential to bolstering the long term health of the program and are preparing us for sustained growth and success as market demand returns.”

A Boeing spokesman wouldn’t confirm a Wall Street Journal report Friday that deliveries aren’t likely to restart until February or March. Company executives avoided any discussion of when the handovers might resume during an October earnings call, saying the timing would be determined by the U.S. Federal Aviation Administration and customers. In July, they had sounded upbeat while guiding that fewer than 50 Dreamliners would be delivered this year.

For each manufacturing glitch that strays from its design specifications, Boeing has to file a so-called notice of escapement with the FAA that evaluates the problem, recommends a fix and provides an engineering analysis to back up its finding.

The company is still working through those notices, along with a broader inspection regimen for the 787, according to people familiar with the situation.

There are about 20 locations on Dreamliners where potential quality breaches have been identified, said one of the people, who asked not to be identified discussing a confidential matter. At a Boeing fabrication plant in South Carolina, for example, mechanics are inspecting the area surrounding doors at the rear of the aircraft for tiny gaps, one of the people said. Dreamliners continue to roll off the line in North Charleston at a slow rate of two planes a month, the person said.

Conducting the inspections can be time consuming and costly since, in some areas of the plane, workers have to tear out passenger cabins to gain access. Since not every Dreamliner has every flaw, Boeing has proposed creating a methodology to narrow the checks based on its own analysis and past inspections.

The planemaker had initially requested permission to inspect a handful of planes and, if they passed, use its regimen for the rest of the undelivered aircraft, the people said. The FAA rejected that plan, and company and the regulator haven’t yet agreed on an appropriate level of inspections, said one of the people.

Looming in the background are the two fatal crashes of the company’s 737 Max aircraft, which prompted a worldwide grounding. The FAA was criticized in multiple investigations for its approval of the plane, which had a design flaw that was implicated in the crashes.

Since then, the FAA has repeatedly said it’s taking a tougher stance in its oversight of Boeing, using its own inspectors to perform checks, among other actions.

Lawmakers in Congress on Friday announced that they had asked the Transportation Department’s inspector general to review the FAA’s oversight of the 787. The measure was sought by Democrats and Republicans who lead the U.S. House Transportation and Infrastructure Committee.

For all the scrutiny and uncertainty surrounding the 787, a key source of company’s cash, Boeing shares were up 6.2% this year through Thursday. The stock fell 5.8% to $214.13 at the close Friday after the Journal report on the latest 787 issues, including door inspections.

On the sidelines of an industry conference in Austin earlier this week, Dreamliner customers bemoaned the lack of visibility into the delays and the steady drip of bad news. One buyer, who asked not to be identified, fretted that planes originally slated to arrive early this year won’t show up until next summer.

“They have lost a lot of respect from a lot of airlines,” Udvar-Hazy said of Boeing. While there has been some improvement in production and oversight, “I don’t think that they’re paying attention as much as they should to the customers,” he added.