The opening gambits by Boeing Co.’s new boss show the risks Dave Calhoun is willing to take to reset the deeply troubled planemaker.

Calhoun, who officially takes charge Monday, pushed to release humiliating internal messages last week even though they may darken public perception for years to come -- with Boeing’s own employees suggesting rot in a once-vaunted safety culture and mocking designers and regulators on the ill-fated 737 Max. He also was heavily involved in the decision to drop Boeing’s long-held opposition to simulator training for Max pilots, said people close to the company.

Those steps are just the start as Calhoun settles into a 36th-floor suite at Boeing’s Chicago headquarters, entrusted with turning around a company that has been widely censured for its arrogance, failure to take responsibility after two crashes killed 346 people, and unrealistic estimates of when the Max would be cleared to fly again. The bungling cost former CEO Dennis Muilenburg his job, and the bad news is far from over: Boeing is expected to reveal one of the largest writedowns in its history this month along with fourth-quarter results.

“The company has a unique opportunity to get all the bad news on the table now,” said Jim Schrager, professor of entrepreneurship and strategy at the University of Chicago’s Booth School of Business. “It’s time to get this right and make the turnaround.”

The accounting charge is likely to be in the $6 billion range, said Cowen & Co. analyst Cai von Rumohr, as Boeing balloons its reserve to compensate airlines to $12 billion. That’s another risk for investors, who have taken a hit from the crisis while dodging a full-fledged meltdown.

The shares have tumbled 22 per cent since the second Max crash prompted a worldwide flying ban in March. That was the biggest drop on the Dow Jones Industrial Average.

Calhoun, a former General Electric Co. executive who became a senior leader at Blackstone Group Inc., is far from an outsider at Boeing. He has served on the aerospace titan’s board for a decade, and he took over from Muilenburg as chairman in October. That means he is identified with the moves that have left the company’s standing with consumers, lawmakers and regulators in shambles.

Boeing’s reversal on simulator training was approved by the Calhoun-led board at its meeting in December, said people familiar with the deliberations, who asked not to be identified because the discussions were private.

When directors asked to Calhoun to take charge, they vowed to make Boeing more transparent. With his support, interim CEO Greg Smith followed through last week by releasing a new batch of internal messages that a key lawmaker in the U.S. Congress called “incredibly damning.” 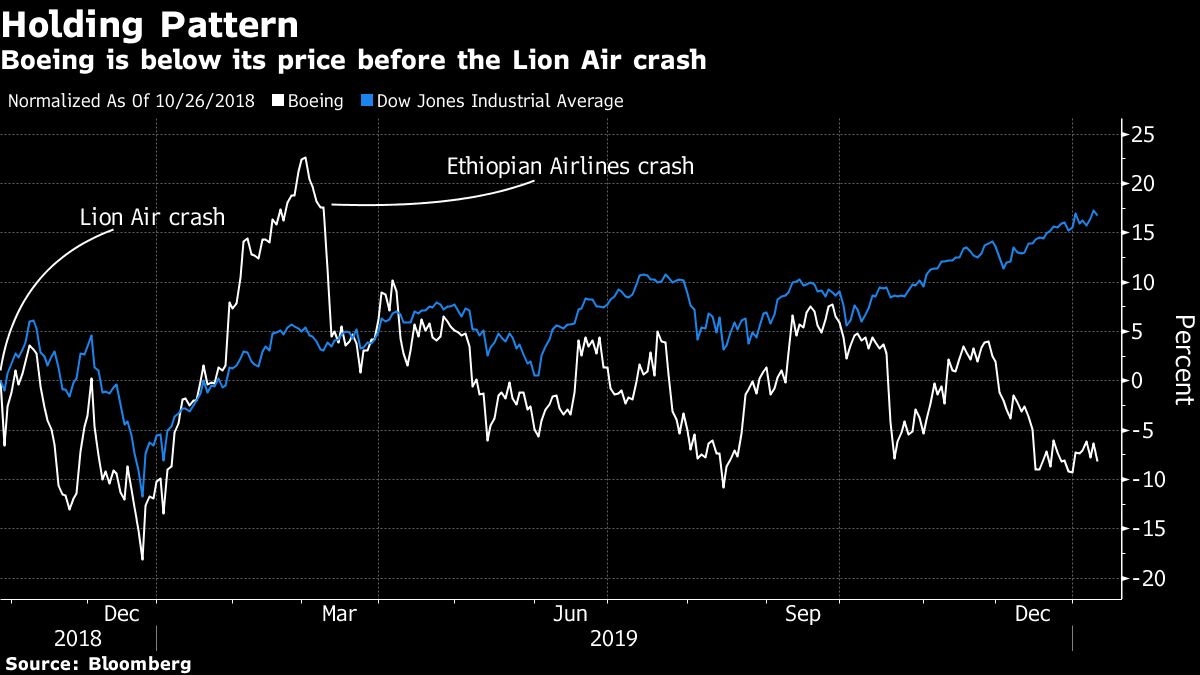 In one exchange, a company pilot said the Max was “designed by clowns, who in turn are supervised by monkeys.” In other messages, employees bragged of their ability to hoodwink regulators.

Calhoun has already begun reaching out to the U.S. Federal Aviation Administration, which delivered a rare public rebuke of Muilenburg shortly before he was ousted in December. His top priority as CEO will be to look inward to the company’s issues and cultural rifts and to spend meaningful time in its Seattle manufacturing hub, said a person close to the board.

Revamping Boeing’s culture is especially critical for Calhoun and Larry Kellner, the former Continental Airlines chief who replaced him as Boeing chairman, given the lapses that have come to light from blue-ribbon panels poring over the Max’s development.

“It seems like there’s been an absolute breakdown,” said Bloomberg Intelligence analyst George Ferguson. “They’re going to have to find a way to ditch the arrogance. It’s hurt their relations with the FAA, customers and suppliers.”

The crisis has also left Boeing at risk of losing ground to Airbus SE in the global aerospace duopoly. Calhoun is convinced there is a way to simplify strategy and planning for Boeing’s numbingly complex operations, said the person familiar with the matter.

Then there’s the challenge of revitalizing a demoralized workforce. Muilenburg, an engineer and Boeing lifer, had pledged to reorganize the company’s engineering corps and create buffers to insulate workers from undo pressure from business managers. That task now falls to Calhoun, an accountant by training.

“He will make hard decisions at Boeing and he won’t hide behind them,” said Kennedy, a retired spokesman who worked closely with Calhoun for four years at GE’s aviation division. That extends to personnel decisions.

“It won’t be a cozy world,” Kennedy said.

Calhoun’s task is daunting. It could take months before the Max is back in service, and more than a year after that for the company to nurse its suppliers back to health and return the 737 to pre-crash production levels.

Other aircraft programs faced stumbles of their own, with the 777X airplane, KC-46 military tanker and Starliner spacecraft suffering high-profile problems and delays.

At GE Aviation, Calhoun built a team that included David Joyce, who went on to become the division’s long-time leader. While the aerospace industry was mired in a recession following the 9/11 attacks in 2001, Calhoun pitched Boeing hard on a cutting-edge engine for the plane that became the 787 Dreamliner.

The GEnx turbofan wasn’t an easy sell to GE management either.

“Calhoun had to make a very aggressive business case in a very horrible market,” Kennedy said.

The GEnx went on to become the fastest-selling engine of its kind at GE, with 2,700 units in service or on order. And it provided key concepts for the smaller Leap power plant in the Max and many of Airbus’s A320neo jets. The Leap, produced by a GE-Safran SA alliance, has garnered 19,000 orders and commitments.

More recently, Calhoun has been instrumental in turning around Caterpillar Inc. as chairman and Nielsen Holdings Plc as CEO. During his seven-year tenure leading the television ratings giant, which included taking it public, he took home at least $235 million in cash and stock sales.

For 62-year-old Calhoun, whose name had circulated in previous Boeing CEO searches, turning the manufacturer around would be the pinnacle of a four-decade career. What’s not known is how long he intends to stay at Boeing, where executives traditionally leave at age 65.

Will he be the visionary who pushed GE to bet big on a new engine in a horrible market? Or will the Wall Street veteran be content to “stabilize the company and then continue the cash-extraction process?” asked analyst Richard Aboulafia of Teal Group.

By Aboulafia’s reckoning, Boeing spent JS$78 billion on shareholder returns over the past 15 years while milking the lucrative 737 and treating engineers as an expendable cost center. The cash cow is now vulnerable, and Boeing has no product to counteract the sales success of Airbus’s longest-range narrow-body jets.

If Boeing doesn’t tilt its strategy back to emphasizing product investment over stock buybacks once the Max crisis abates, it will hand its European rival the chance to build an insurmountable lead, Aboulafia warned.

“It will take five years to show up, 10 years to really show and 15 years to be irreversible,” Aboulafia said. “Game over.”