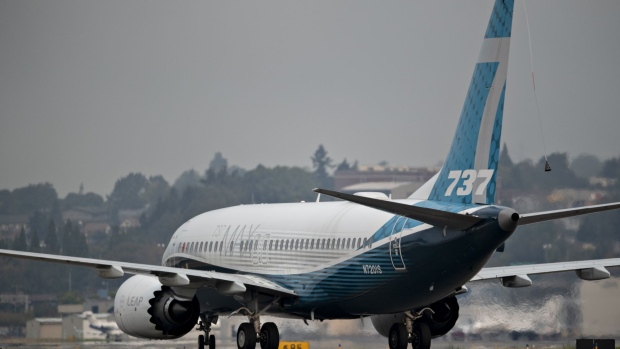 Boeing’s settlement of a criminal fraud probe marks another milestone in its recovery from the 737 Max crisis. , Bloomberg

(Bloomberg) -- Boeing Co. is taking steps to bolster safety and address criticism that it lacked a robust, in-house oversight program in the wake of two fatal 737 Max accidents.

Even so, there’s still much to be done some three years after the twin tragedies, which killed 346 people and sparked a global grounding of the Max aircraft, plunging Boeing into crisis, the US planemaker’s Chief Aerospace Safety Officer Michael Delaney said.

“The reality is we are where we are,” Delaney told reporters at a briefing north of Seattle on Monday in the US. “We have to build forward. We have to extend our hand,” he said, providing the first detailed overview of the measures Boeing is putting into place to address the miscues and lapses that contributed to the two tragedies in 2018 and 2019.

Boeing’s reputation for quality and safety was badly damaged as a result of the incidents and it’s grappling with tougher regulatory scrutiny. The planemaker hasn’t delivered any 787 Dreamliners in almost a year as it addresses lapses in its factories, and some employees are still afraid to buck a traditionally top-down management system.

Delaney, who took over the newly created position last year, is trying to instill a more open and transparent culture where employees speak up without fear of retaliation. That’s one facet of a larger framework he’s putting in place, known as a safety management system, that uses data and other tools to address risks before they flare into broader issues.

His deputy, Al Madar, pointed to one counterintuitive sign the approach is starting to take root: Boeing saw a record number of safety reports filed by employees in March and April.

“That data tells me what we’re doing is working,” said Madar, who oversaw American Airlines Group Inc.’s operational safety program before joining Boeing. Now, the company is preparing to roll out an ombudsman program to handle complaints for employees who conduct reviews on the behalf of the Federal Aviation Administration.

Channels allowing employees to sound concerns without fear of retribution are one hallmark of safety management systems already in use at many airlines. The approach has been widely advocated by accident investigators such as the National Transportation Safety Board, aviation regulators and industry groups as a way of ensuring broader, voluntary adherence to practices designed to reduce risks in an organization.

Several investigations after the 737 Max crashes found the lack of such a framework at Boeing contributed to the miscommunication and other breakdowns that led to the plane’s flawed design. The FAA accepted Boeing’s safety management system in December 2020, and determined it was operating as intended in July.

Because government inspectors can’t possibly review every decision a company like Boeing might make, such systems are designed to create internal checks and balances that perform a similar function. The company is developing tools to comb through data for warning signs, from spikes in defective parts at suppliers to a rash of engine shutdowns by aircraft model. The findings are shared in weekly safety reviews with Boeing’s division leaders.