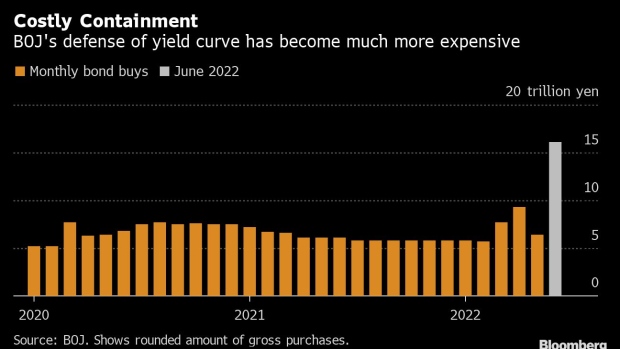 A customer places Japanese 1,000 yen banknotes on a checkout counter while making a purchase at an Akidai YK supermarket in Tokyo, Japan, on Monday, June 27, 2022. Japan's key inflation gauge stayed above the Bank of Japan's target level of 2%, a result that will likely keep speculation alive over possible policy adjustments at the central bank. Photographer: Kiyoshi Ota/Bloomberg , Bloomberg

(Bloomberg) -- The Bank of Japan’s decision to pass up an opportunity to ramp up its policy defenses points to a fear of triggering a further weakening of the embattled yen.

The BOJ on Thursday kept its bond purchase plan unchanged for the July-September quarter, a move that surprised some market participants who had expected Governor Haruhiko Kuroda to show a clear intention to buy more in defense of recent pressure on yields.

The yen had set a fresh 24-year low against the dollar the night before the announcement, a factor that may have fueled concern among officials that an increase in purchases would trigger further declines. The currency is just a hair’s breadth away from its worst drawdown ever, according to data compiled by Bloomberg.

“The BOJ is trying to hit the brakes on the weaker yen since Kuroda has said its rapid drop isn’t desirable,” said Hideo Kumano, executive economist at Dai-Ichi Life Research Institute. “It’s also a tacit message to the government. The BOJ is doing its bit to keep the yen from plunging further.”

The central bank is pushing back against normalizing policy as peers around the world race to hike rates to rein in sky-high inflation. It insists the Japanese economy still needs support despite the fact that its actions weigh on the yen, ratcheting up cost pressures on householders and many business.

Officials from the BOJ, the Ministry of Finance and the Financial Services Agency met last month and expressed their concern about the recent sudden weakening of the yen in a statement. Later, the BOJ added a reference to foreign exchange rates to its list of risks while maintaining monetary easing.

The central bank boosted bond buying to record levels in June as 10-year yields edged above its 0.25% cap. It spent more than 16 trillion yen ($118 billion), its largest monthly purchase of bonds since Kuroda took the helm of the BOJ in 2013.