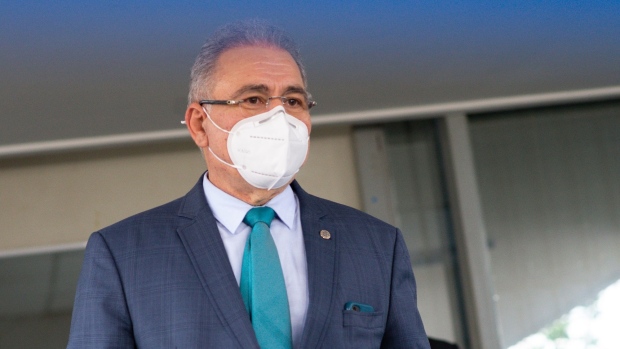 Marcelo Queiroga, Brazil's new health minister, arrives for a press conference at the Ministry of Health in Brasilia, Brazil, on Tuesday, March 16, 2021. Queiroga, the cardiologist who’s taking the helm of Brazil’s health ministry, said it's President Jair Bolsonaro who'll continue to dictate policies to fight a pandemic that is claiming about 2,000 lives a day. , Bloomberg

Queiroga didn’t return to Brazil with Bolsonaro’s delegation Tuesday evening, but stayed on in New York to quarantine.

“I tested positive, but I have no symptoms,” Queiroga said to Bloomberg through text messages. In an official statement, Brazil’s government said he “is doing well.” The minister, 55, is a cardiologist and was vaccinated in March.

The health minister becomes the second member of Brazil’s delegation to the UN who’s now tested positive for Covid. On Monday, a Brazilian diplomat also tested positive, was then isolated and removed from the delegation.

Queiroga had attended Bolsonaro’s meeting with U.K. Prime Minister Boris Johnson. In pictures and videos released by the Brazilian government, Queiroga is the only one in the country’s delegation wearing a mask.

On Sunday, when Bolsonaro’s traveling party arrived in the U.S, Queiroga appeared next to Bolsonaro and other ministers eating pizza on a sidewalk outside the restaurant in Manhattan.

New York City Mayor Bill de Blasio, less than pleased by it all, called out the Brazilian president by name.

“We need to send a message to all the world leaders, including most notably Bolsonaro from Brazil, that if you intend to come here you need to be vaccinated,” Bill de Blasio told journalists. “If you don’t want to be vaccinated, don’t bother coming, because everyone should be safe together.”