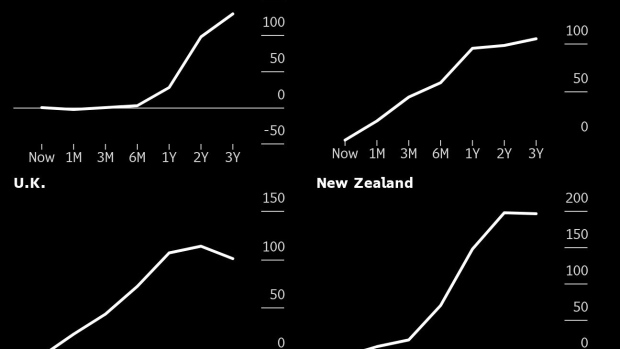 (Bloomberg) -- The bond market’s age-old measure of growth is flashing an ominous warning as the world’s central banks move closer to boosting interest rates from near record lows.

Traders are wagering on rate hikes of as much as 171 basis points over the next year in countries including the U.K., New Zealand and South Korea amid soaring costs of living and commodity prices. Yet a flattening in yield curves -- historically seen as the market’s assessment of economic health -- indicates rising concern that such a rapid withdrawal of support will hurt the nascent recovery.

Such a view is not without its detractors; yield-curve signals have been distorted by more than a decade of central bank bond-buying. But with these gauges aligning with other growth indicators and talk of so-called stagflation gripping Wall Street, investors are pondering whether such a rapid pace of tightening -- if delivered -- could prove a costly mistake.

“The downside surprise to growth is probably going to outlive the upside in inflation,” said Ebrahim Rahbari, global head of Group-of-10 foreign-exchange strategy at Citigroup Inc. “We might well run into a situation where central banks will turn hawkish for a little while only to have to ease maybe in a year or so again.”

This concern is particularly acute in the U.K. Traders are pricing in more than 100 basis points of Bank of England tightening by the end of 2022 -- the most aggressive cycle this century. That’s even as the nation grapples with the dour economic after-effects of Brexit, and a resurgence of Covid-19 cases heading into winter.

Growth concerns have taken a toll on the pound, which fell to its lowest this year at the end of September. While it has since recovered, traders are struggling to figure out what rate hikes would mean for growth -- and sterling.

Higher rates have also failed to boost the South Korean won, among Asia’s worst performers over the past six months. And it’s a similar story for the New Zealand dollar, which fell after the Reserve Bank of New Zealand hiked rates last month; while it’s since regained some ground, forecasts for the kiwi have steadily fallen as markets price the central bank’s path to neutral.

“Most other developed market central banks have not begun the process of normalizing -- let alone pricing in a projected cash rate path to neutral,” said Prashant Newnaha, a strategist at TD Securities in Singapore. “With the prospect that other central banks play catch-up in hiking rates, upside for the New Zealand dollar should be capped.”

This trend is also present in emerging markets, where currencies have sunk to the weakest level since March 2020 relative to average local-bond yields. That suggests investors are discounting the appeal of rising interest rates, fretting instead over the toxic combination of slower global growth and faster inflation.

Still, the world is not exactly on the brink of a new recession. The OECD’s leading indicators point to moderating growth in the U.S., euro zone and U.K., dragged down in part by “the persistent rise in consumer prices in recent months, driven by surging energy prices,” according to an Oct. 12 release.

And the reliability of yield curves as an economic health indicator has been called into question amid hefty central bank bond-buying programs and the pandemic’s mega spending programs, which have upended conventional models.

“I would be cautious in over-interpreting what the curves are trying to tell us because there are so many things going on,” UBS Group AG chief economist Arend Kapteyn said in an interview.

But the question of whether economies are strong enough to withstand higher borrowing costs has markets transfixed nonetheless. Feeding into that is the debate about whether price pressures are indeed transitory, or whether inflation will head back below central-bank targets if energy costs ease and supply chain issues fade. Such a reversal could prompt an early end to rate hiking just as easily as a hit to growth.

Indeed, the short-end rates market in the U.K. is already signaling that any tightening will be short-lived. Traders are betting that increases will peak in 12 to 18 months, and will soon be followed by a series of cuts to bring the key rate back below 1% by 2024.

“I’m having the impression that the central banks are getting ahead of themselves,” said Kei Yamazaki, a senior fund manager at Sumitomo Mitsui DS Asset Management Co. in Tokyo. “The market is sending signals that rate hikes are still too early.”