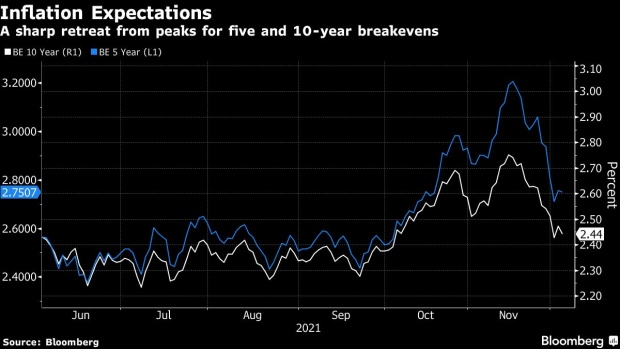 (Bloomberg) -- Bond traders’ faith in the Federal Reserve’s power to curb inflation is about to face its biggest test in four decades.

A drumbeat from Fed officials about combating rising consumer prices intensified in recent days after Chair Jerome Powell told U.S. lawmakers that inflation has become “more persistent” and should no longer be referred to as transitory. He said an elevated inflation rate that will “linger well into next year” lays the groundwork for the central bank to discuss winding down its asset purchases at a faster pace. The market reacted by narrowing the gap between short- and long-term Treasury yields, wagering that tighter monetary policy will cool growth and bring prices under control.

The Fed’s pivot comes as analysts expect data on Dec. 10 to show that the U.S. consumer price index surged 6.7% in November from a year earlier, up from a pace of 6.2% in October. That would be the biggest jump since the Fed was aggressively fighting the inflationary spiral of the early 1980s and provide a crucial test of investors’ views on how long such increases will persist.

“Our view is that inflation pressure will ease during the course of next year,” said Jason Pride, the chief investment officer for private wealth at Glenmede Investment Management, expecting the gradual resolution of supply-chain issues and slowing wage growth. “In the near term, hotter inflation numbers will put pressure on the Fed to move faster” and extend the recent sharp climb in short-dated Treasury yields, he said.

Longer term, the bond market has gained confidence in the view that peak inflation is near. The recent tumble in commodity prices, led by oil, added momentum to a reversal in widely watched bond-market measures of inflation expectations that are followed by Fed officials. So-called inflation breakeven rates over the next 5 and 10 years -- which are based on the difference between yields on inflation-protected and normal Treasuries -- have retreated sharply from the peaks hit less than a month ago.

“We have been short breakevens and they look a little more fairly priced,” said Bob Miller, head of Americas fundamental fixed income at BlackRock Inc., who expects the 10-year breakeven rate to fall toward 2.25% from the current level of around 2.45%. “We expect CPI peaks by the end of the first quarter next year, and long-dated breakevens had reflected a view of higher inflation for longer than that.”

The hawkish tone from the Fed has also spurred a more pronounced flattening of the yield curve, a reaction that typically reflects a jump in policy sensitive short-dated Treasury yields on expectations of rate hikes in the next 12 months. But the recent flattening has also been driven by declining 10- and 30-year yields, signifying expectations for slower long-term growth and inflation.

Even so, Glenmede’s Pride said the move may well reflect a decision by pensions and other long-term investors to sell equities that have performed well during the last 18 months and allocate the proceeds to long-maturity bonds. The coming sales of 10- and 30-year debt will test market demand at current levels and could produce sloppy auctions ahead of the inflation report.

The low level of bond yields also indicates the market’s view that the Fed’s tightening cycle will prove modest, in part because rich bond and equity valuations are particularly vulnerable during a period of tightening financial conditions.

The Fed halted its last tightening cycle amid escalating market turmoil in late 2018 that was spilling over into the broad economy, and that problem could reemerge given that corporate and government debt levels have swelled even more since the pandemic. An inversion on Friday between eurodollar interest-rate contracts between December 2023 and 2024 illustrated traders betting on the limits of tighter policy in the next couple of years.

“The Fed needs to normalize policy over time, but they also need to be careful they don’t rip off the Band-Aid too fast,” said Pride.

BlackRock’s Miller said the bond market is acting as if the Fed will only push up its overnight rate to around 1.50% to 1.75% and “that’s where we see the Fed pausing for a period of time and assessing the outlook for growth and inflation over the cycle.” He said the hikes may ultimately exceed that, which would make long-dated yields at current levels too low.