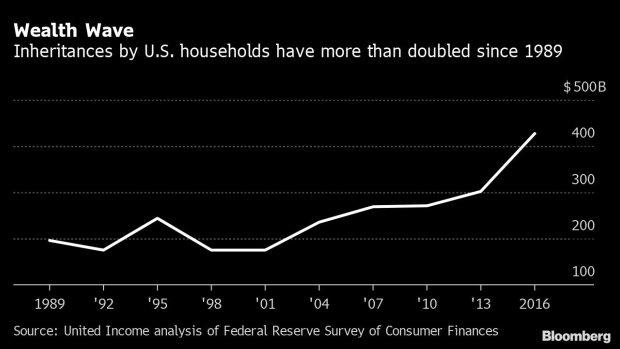 (Bloomberg) -- The rich aren’t just getting richer. They’re getting older. And, fortunately for their children, they’re set to leave plenty of money in the bank.

About $36 trillion will flow from one generation to another over the next 30 years, according to a report Tuesday from wealth manager United Income. The pace of bequests has already started surging. Americans inherited $427 billion in 2016, the most recent data available, up 119% from 1989 even after adjusting for inflation.

“Wealth equal to nearly two times the size of the U.S. GDP is expected to be gifted to charities and heirs over the next few decades,” said United Income founder Matt Fellowes. “It’s a historically unprecedented amount that is almost incomprehensibly large.”

The beneficiaries aren’t all that young themselves. The study, which uses Federal Reserve and academic data, shows that from 1989 to 2016 U.S. households inherited more than $8.5 trillion. Over that time, the average age of recipients rose by a decade to 51. More than a quarter of bequests now go to adults 61 or older.

“Instead of diapers and school, inheritances are increasingly going toward medical bills and retirement savings,” Fellowes said.

Even inheritances, then, are part of a dynamic that’s widening the wealth gap between generations. Americans younger than 50 held just 16% of all investable assets in 2016, down from 31% in 1989, according to the Fed’s triennial Survey of Consumer Finances, leaving the rest to households 50 and older.

While boomers as a group inherited trillions from their parents, most members of the postwar generation got nothing. About 20% of households have received inheritances, United Income’s analysis shows, a share that’s flat over the past 30 years.

The good news is that these bequests are coming in handy. The median recipient gets about $55,000, which is more than double their typical retirement savings.

“Most inheritances are going to older adults who have little in the way of retirement savings,” said Fellowes, a former Brookings Institution scholar. “People receiving inheritances are pretty middle class.”

United Income, an online retirement planning firm, was founded in 2016 and acquired in July by Capital One Financial Corp.

As more Americans live longer without the safety net of a traditional pension, the data suggest they’re spending frugally to make sure their wealth lasts. The result is more Americans dying before they can spend all of their savings. Financial advisers say they often need to encourage affluent clients to enjoy their wealth rather than hoarding it.

Only about 9% of estates consist entirely of a house or other property, United Income’s analysis shows. The average estate is 46% stocks, bonds, cash and other liquid investments –- giving an immediate boost to recipients’ own retirement planning at a key time.

The money left behind for middle-class Americans is dwarfed by that inherited by the children of the very wealthy. United Income’s estimates don’t include gifts made during donors’ lifetimes –- a typical move in estate planning for the ultra-high net worth cohort, often using trusts. It still found a widening gulf between the super rich and everyone else.

The median inheritance has risen only about $15,000 in three decades, while they’ve more than doubled for the 0.3% of Americans receiving at least $1 million. In 1989, their inheritances averaged an inflation-adjusted $2.7 million. By 2016, they were each getting an average of $6.6 million.

To contact the reporter on this story: Ben Steverman in New York at bsteverman@bloomberg.net