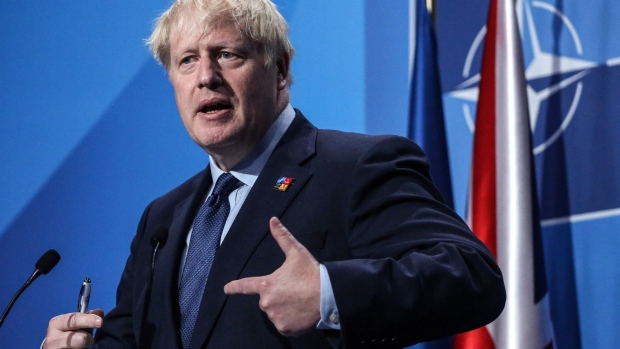 “There may be some question about quite how much more the Saudis could pump out at this particular moment,” Johnson told the House of Commons on Monday. Nonetheless, “they need to produce more oil -- no question.”

Last week, Biden said he hoped key Persian Gulf producers would ramp up output as he prepared for a trip this month to Saudi Arabia, which leads the OPEC+ alliance. Crude prices remain above $110 a barrel as supplies fail to keep pace with a post-pandemic rebound in demand, squeezing consumers and threatening to tip the global economy into recession.

Global oil markets have also been roiled by plans to sanction Russia’s energy trade over its invasion of Ukraine, which could result in the biggest supply disruption in decades, according to the International Energy Agency.

“There’s no doubt that we are going to need a lot more OPEC+ oil,” Johnson said, referring to the coalition between the Organization of Petroleum Exporting Countries and other producers.

OPEC+ has already agreed to accelerate its planned output hikes this summer, though investment constraints and political instability mean that most members have no additional supplies to offer. Analysts are even questioning just how much extra capacity can be deployed by the Saudis and neighboring United Arab Emirates.

French President Emmanuel Macron was caught on camera last week telling Biden at the G-7 summit that the UAE ruler, Sheikh Mohammed bin Zayed, had previously told him that Abu Dhabi is at “maximum” production and the Saudis can only increase “a little more.”

The UAE promptly sought to clarify that it had been referring to quota limits agreed with fellow OPEC+ members, rather than any physical constraints on its output.

Saudi Arabia’s official data indicates that it can produce as much as 12 million barrels a day, or about 1.5 million a day more than current levels. Still, Bloomberg estimates show its highest monthly average level at 11.6 million a day, reached in early 2020.