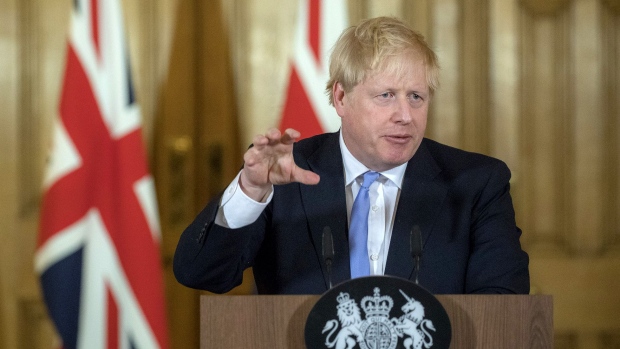 Boris Johnson, U.K. prime minister, gestures as he speaks during a news conference inside number 10 Downing Street in London, U.K., on Monday, March 9, 2020. Johnson's spokesman said both the government and Bank of England are ready to take action to bolster the economy if needed. Photographer: Bloomberg/Bloomberg , Photographer: Bloomberg/Bloomberg

Prime Minister Boris Johnson was still being monitored in a critical care unit as the U.K.’s coronavirus crisis deepened, with the highest daily rise in deaths so far.

After he was taken into intensive care on Monday, Johnson, 55, remained in a stable condition receiving oxygen treatment, and has not been diagnosed with pneumonia or put on a ventilator, his officials said.

But the prime minister’s personal struggle to recover from Covid-19 leaves the U.K. without its leader at a critical time as the country prepares for cases to increase over the next 10 days. The death toll rose by 786, the Department for Health said Tuesday, bringing the total to 6,159.

Asked why the U.K.’s death rates were so much higher than Germany’s, England’s Chief Medical Officer Chris Whitty appeared to blame the British government’s lack of wide testing for the virus.

There were hints of better news elsewhere in the U.K. data, according to a televised briefing shortly after the death figures were published. There is no acceleration in the number of new cases, and it is “possible” that the infection curve is starting to flatten, said Patrick Vallance, the government’s chief scientific adviser. The trend won’t be clear for about another week, he said.

With Johnson out of action, Foreign Secretary Dominic Raab is deputizing at the head of the government, with the peak of the outbreak expected in the days ahead. “I’m confident he’ll pull through because if there’s one thing I know about the prime minister, he’s a fighter,” Raab said at the same press conference on Tuesday evening.

The cabinet is working collectively to deliver Johnson’s instructions on fighting the pandemic, Raab said when asked how much power he has over government policy.

Johnson was taken to St. Thomas’ Hospital in London on Sunday evening after struggling to shake off virus symptoms for 10 days.

Adding to the government’s woes, Cabinet Minister Michael Gove -- a key member of Johnson’s top team -- said he is in self-isolation after a family member displayed symptoms of coronavirus at the weekend. Gove has no symptoms himself and is continuing to work, he said in a Twitter post on Tuesday.

Many thanks for kind messages. In accordance with the guidance, I am isolating at home after a member of my family started to display mild symptoms of coronavirus on Sunday. I have not displayed any symptoms and am continuing to work as normal. #StayHomeSaveLives

Raab and the rest of the Cabinet face a series of key decisions in the days ahead -- on the process for easing the national lock down, and whether restrictions on people’s movements should be lifted, extended or tightened even further.

It’s an extraordinary turn of events for Johnson. Just over two months ago, he was at the peak of his powers, celebrating Britain’s departure from the European Union after scoring an emphatic election victory.

U.S. President Donald Trump, a supporter of Johnson, said at a press briefing that he has told pharmaceutical companies to get in touch with London to offer help. Trump cited “rather complex” therapeutic treatments for the virus with “really incredible results,” but didn’t specify them.

“When you get brought into intensive care, that gets very, very serious with this particular disease,” Trump said.

With Johnson out of action, the untested Raab will now need to get a grip on the government machine and coordinate the pandemic response. Britain’s strategy for defeating coronavirus has already come under strain, with ministers accepting they had not done enough to test people for infections.

Johnson himself was criticized by medical experts and members of his own Conservative Party for failing to act quickly enough to close schools and ban public gatherings.

There have been divisions among Johnson’s officials during his period of isolation already, a situation that risks getting worse with Raab, who was a leadership rival to Johnson last year, now in charge. Gove and Health Secretary Matt Hancock also stood for party leader and are now in lead roles in the virus strategy.

On Tuesday, Gove told the BBC the government is working “in a team way” and taking decisions “completely by consensus,” as Raab chairs key meetings. “Physically, Boris is full of life and fit -- he is a keen tennis player and runner and he’s a man of great zest and appetite for life,” Gove told LBC radio later. “We hope and pray that he enjoys a quick recovery.”

Johnson revealed on March 27 he had tested positive for coronavirus and was going into isolation in his Downing Street apartment. His meals and official papers were left outside his door, but he continued to chair daily crisis meetings via video link.

The premier recorded several “selfie” video messages for social media in recent days in which he insisted he was doing well and remained in charge. At times, though, he appeared short of breath and visibly unwell.

After being taken into intensive care, the premier received well wishes from colleagues including his predecessors Theresa May and David Cameron, as well as his chief opponent, Labour Party Leader Keir Starmer. International leaders including Irish premier Leo Varadkar and President Emmanuel Macron of France also sent messages of support.

Johnson’s fiancee, Carrie Symonds, who is pregnant, also had symptoms of the virus and had been isolating.