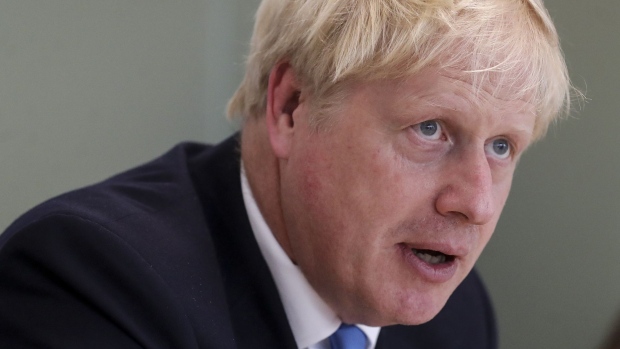 A Scottish judge refused to block Boris Johnson’s plan to suspend Parliament, dealing a blow to lawmakers who argued that there isn’t enough time to thwart a no-deal Brexit.

Judge Raymond Doherty in Edinburgh held off granting an emergency injunction against the prime minister’s plan, saying that there is time to hold more hearings on the issue next week. A Belfast court on Friday also put off a decision on whether to issue an injunction, giving more time for the situation in Westminster to develop before addressing the question.

Johnson’s decision to suspend Parliament in the run up to the Oct. 31 Brexit deadline has unleashed a wave of opposition from lawmakers who say the move will make a no-deal split from the European Union more likely.

The decisions to push the hearings into next week set up what could be the “most important week in modern British history,” Ian Murray, one of the lawmakers involved in the Scottish case, said in a statement.

Ruling on the Scottish challenge, brought by more than 70 lawmakers, Doherty said that while he isn’t satisfied there’s a “cogent need” for an interim injunction against Parliament’s suspension, it’s “in the interest of justice that this proceeds sooner rather than later.” A full hearing in the case was moved up to Sept. 3.

Meanwhile, a third legal challenge to Parliament’s suspension, by the businesswoman Gina Miller and the former Prime Minister John Major, is due to get an initial review on Sept. 5.

The lawmakers in the Scottish case had argued that the government’s advice to the Queen to suspend Parliament for as long as five weeks was unconstitutional because it curtailed debate in Westminster. Doherty declined to make any findings on the lawmakers’ underlying case and limited his ruling to the timing of an injunction.

The cases will likely end up in front of the U.K. Supreme Court in London, which may have to cut its traditional summer break to review the matter. The tight time line and the multiple judicial reviews will be a “complicating factor for the government,” said Richard Clayton, a London appellate lawyer.

“They’ve not built it into their timetable,” said Clayton, who isn’t involved in the case. “This is a serious problem for the government regardless of the outcome.”

--With assistance from Peter Flanagan and Franz Wild.