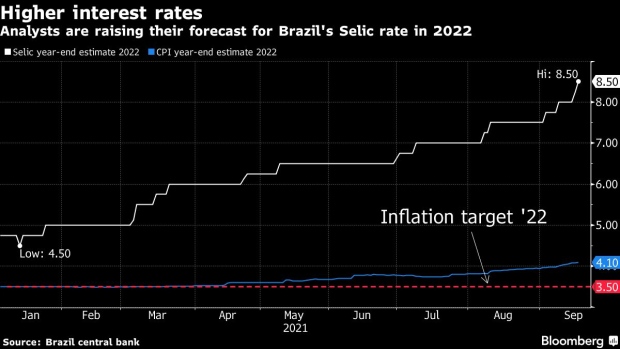 Brazil’s central bank raised its benchmark interest rate by a full percentage point and pledged another hike of the same magnitude for October as it seks to control inflation that’s soaring toward 10%.

Policy makers led by Roberto Campos Neto on Wednesday lifted the Selic to 6.25%, as anticipated by 35 of 39 economists in a Bloomberg survey. The other analysts expected even bigger hikes.

“For the next meeting, the Committee foresees another adjustment of the same magnitude,” policy makers wrote in a statement accompanying their unanimous decision. “This pace is the most appropriate to guarantee inflation convergence to the target at the relevant horizon and, simultaneously, allow the committee to obtain more information regarding the state of the economy and the persistence of shocks.”

The central bank has raised borrowing costs by 425 basis points since March in an aggressive tightening cycle that has done little to rein in prices. Not only has annual inflation accelerated since then, but expectations for 2022 continue to rise further above target. Fueling prices is a severe drought that has forced the government to increase electricity rates, as well as concerns about growing public spending that have weighed on the currency.

“Inflation has surprised to the upside, and fresh surprises can also occur,” Alvaro Frasson, economist at Banco BTG Pactual SA, said before the bank’s decision. “What remains to be seen is whether or not the hike will help calm 2022 consumer price forecasts, which keep on accelerating.”

Earlier in the day, the U.S. Federal Reserve decided to maintain the target range for its benchmark policy rate at zero to 0.25% while signaling it could begin scaling back asset purchases in November.

Annual inflation hit 9.68% in August, with eight out of nine product and service categories surveyed by the statistics institute rising on the month. Analysts see consumer prices rising 8.35% this year and 4.10% in 2022, well above central bank targets of 3.75% and 3.5%, respectively.

Meanwhile, the Brazilian economy is further reopening as the pandemic eases in the country. Brazil’s 7-day rolling average for virus-related deaths has fallen below 600, compared with roughly 3,000 in April, and some states have begun immunizing teenagers.