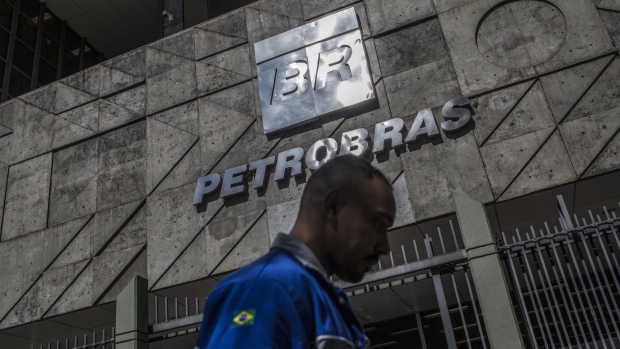 A pedestrian walks past Petroleo Brasileiro SA (Petrobras) headquarters in Rio de Janeiro, Brazil, on Monday, July 29, 2018. Jose Salim Mattar, the ministry of economy's privatizer-in-chief, is on a mission to sell over 100 state-controlled companies from electricity generators to the postal service to the government's crown jewels -- the nation's largest public enterprises including Petrobras. Photographer: Dado Galdieri/Bloomberg , Bloomberg

(Bloomberg) -- Brazilian President Jair Bolsonaro fired the chief executive officer of state-run Petroleo Brasileiro SA a little over a month after appointing him to the job as the fight over high fuel costs escalates.

The government thanked Jose Mauro Ferreira Coelho, who it nominated in mid-April to lead the oil giant, but said Brazil is living through challenging times amid intense volatility of oil prices globally. The administration appointed Caio Mario Paes de Andrade to replace him, according to a note from the Energy Ministry late on Monday.

“In order to ensure conditions for job and income growth, it’s necessary to strengthen the private sector’s capacity to invest as a whole,” the note says. “To work and contribute for a balanced scenario in energy is fundamental to generate value for the company, and benefits for society.”

Coelho is the third Petrobras CEO to be fired by Bolsonaro amid disagreements over fuel prices. His predecessor Joaquim Silva e Luna was dismissed after about a year on the job, while Roberto Castello Branco was ousted in 2021.

Bolsonaro, who’s up for re-election in October, has grown increasingly frustrated with the state-run company’s insistence on keeping fuel prices in line with global levels at a time when Russia’s invasion of Ukraine and subsequent sanctions have upended the energy market. Annual inflation is running above 12% and Bolsonaro trails ex-President Luiz Inacio Lula da Silva in all opinion polls, with economic issues at the forefront of voters’ minds.