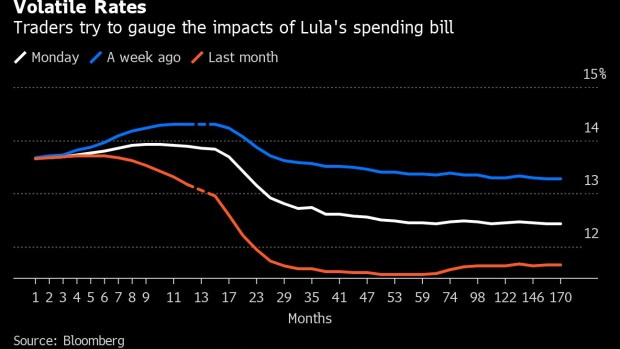 Luiz Inacio Lula da Silva, Brazil's president-elect, during a meeting in Lisbon, Portugal, on Friday, Nov. 18, 2022. Lula's transition team, in its first act, proposed a fiscal waiver for the government to spend up to 200 billion reais ($36.5 billion) more during the next few years, independent of the impact it may cause to the nation’s debt-to-gross domestic product ratio. Photographer: Zed Jameson/Bloomberg , Bloomberg

All economists in a Bloomberg survey see the bank keeping the benchmark Selic at 13.75% on Wednesday in the final meeting before Lula takes office on Jan. 1. Policymakers led by Roberto Campos Neto had raised rates by 11.75 percentage points before pausing in September, stressing they may resuume the monetary tightening cycle if needed.

While pressure from the services sector has started to ease and core price measures have improved, the outlook for next year is uncertain, with analysts revising up inflation estimates to account for additional government spending. Central bankers have entered the debate by calling for “coordination” between monetary and fiscal policies and warning that lack of budget credibility would eventually hurt the economy.

“High Brazilian inflation warrants a rate hold at Wednesday’s central bank meeting, keeping the monetary conditions very tight. Officials may use the post-meeting statement to express concerns about forthcoming economic policy and signal how that may influence their next moves.”

Wednesday’s decision will be published on the central bank’s website after 6:30 p.m. in Brasilia with a statement from its board. Here’s what to look for:

All eyes will be on how the central bank sees the impact of fiscal policy — including greater public spending — on the future path for rates.

Lula’s team is negotiating an increase of 175 billion reais ($33.3 billion) per year to the so-called spending cap, a rule that limits growth of public expenditures to the prior year’s inflation rate. While additional funds are needed to pay for campaign promises, the whole package of social aid was bigger than expected by markets.

Traders reacted by pricing in more rate hikes early next year. Economists delayed bets for the beginning of the easing cycle to August from June.

“The central bank has said that fiscal discussions that don’t ensure a stable debt path can disrupt its plan,” said Solange Srour, chief economist for Brazil at Credit Suisse. “They have been saying that, without a clear fiscal outlook, monetary policy doesn’t work. They should reinforce that message more strongly and explicitly.”

Last month, Campos Neto said at an event hosted by Bloomberg News that he would do “whatever it takes” to bring inflation to target. He warned about the risks to activity and employment stemming from “uncertainty” about how social spending will be financed.

Financial markets have no patience and need to see a sustainable fiscal and debt path, he added.

Analysts will also be on the lookout for the central bank’s latest inflation projections. Consumer prices rose 6.17% annually in early November, down from a peak of over 12% just six months earlier. Still, transportation and food costs rose from the previous month, as the impact of recent tax cuts dissipates.

“If central bankers’ own projections are higher, their tone should also be more hawkish than in the last meeting,” said Leonardo Porto, Brazil chief economist at Citigroup. He believes the monetary authority’s models will point to inflation around 6% this year and 4.9% in 2023 -- above targets of 3.5% and 3.25%, respectively.

In a separate rate decision on Wednesday, Peru’s central bank is expected to raise its benchmark interest rate by 25 basis points in its 17th straight hike. Monthly inflation soared above all forecasts in November, with housing, water, electricity and gas prices on the rise.

Consumer prices increased 8.45% from a year ago, well above the monetary authority’s target range of between 1% and 3%. While policymakers led by Julio Velarde estimate annual inflation has already peaked, they are navigating heightening political uncertainty surrounding another impeachment attempt against President Pedro Castillo.