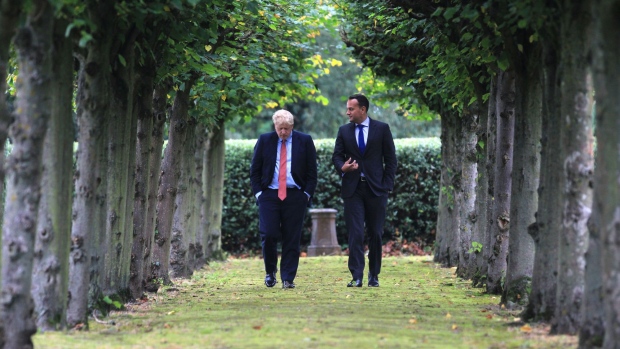 British and European officials will seek to capitalize on the brighter mood surrounding Brexit talks after the leaders of the U.K. and Ireland said they could see a pathway to a potential deal.

The pound jumped by the most in seven months following Thursday’s positive meeting between U.K. Prime Minister Boris Johnson and Irish Premier Leo Varadkar, who has a huge influence over the rest of the European Union on Brexit.

After two and a half hours of “constructive” discussions at a country house in northwest England, Varadkar said he believed an agreement is possible by the Oct. 31 deadline, and urged negotiators to resume talks in Brussels.

With just three weeks left until the U.K. is due to leave the EU, negotiations had soured and stalled. The more favorable tone from the two leaders on Thursday indicated that a breakthrough is still possible, although difficulties remain.

“I had a very good meeting today with the prime minister and our teams together -- very positive, very promising,” Varadkar told reporters after the talks. “I do see a pathway towards an agreement in the coming weeks.” He said he hoped the progress would be enough for formal negotiations to re-start in Brussels.

The two leaders spent almost three hours in each other’s company, and took a walk together around the grounds of the property near Liverpool. Afterward, they issued a joint statement saying they had identified the potential for a route to an agreement during the course of a “detailed and constructive discussion.”

Both leaders “continue to believe that a deal is in everybody’s interest,” they said in the statement. “They agreed that they could see a pathway to a possible deal.”

Johnson is determined to take the U.K. out of the EU by the deadline of Oct. 31 -- even if that means leaving with no agreement to cushion the impact on the economy. EU leaders, meanwhile, are preparing to give Britain an extension to the deadline, even though that’s something Johnson says he will never accept.

Despite more than two years of talks, the key disagreement between the U.K. and the EU is over how to ensure there is no need for checkpoints to inspect goods crossing Ireland’s land border with the U.K.

Johnson has proposed limited customs checks away from the frontier, but Varadkar insists any such inspections will threaten peace in the region.

The EU has also criticized the U.K.’s plan to give the Northern Ireland Assembly a veto over the deal. Johnson’s team say it’s vital to allow the region’s community to give “consent” for the future arrangements on the border.

But for the EU, allowing a veto for Northern Irish politicians would undermine the point of a long-term guarantee against a hard border going up at the frontier.

It’s not clear what compromises were set out during the private talks Thursday. Johnson in particular runs a risk of alienating his supporters in Britain’s Parliament, which must ratify any deal he reaches with the EU.

Johnson’s predecessor, Theresa May, found getting a deal in Brussels was the easy part. She failed three times to persuade members of Parliament to approve her withdrawal agreement. Eventually, that cost May her job.

To contact the reporters on this story: Tim Ross in London at tross54@bloomberg.net;Dara Doyle in Dublin at ddoyle1@bloomberg.net

To contact the editors responsible for this story: Flavia Krause-Jackson at fjackson@bloomberg.net, Robert Jameson